Turkey Could Be a Naval Power in Europe Again 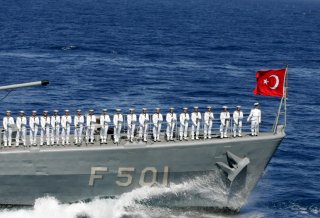 During the Middle Ages, the nomadic Turkish people quickly became adept sailors, and the Ottoman Navy proved crucial in the conquests of Constantinople and the eastern Mediterranean. The Ottomans expanded their reach to the Black Sea, the Indian Ocean, and even the Atlantic.

While the Ottoman Empire's navy stagnated in the seventeenth and eighteenth centuries, the Ottoman Navy had twenty-one battleships and 173 other types of warships in the 1870s. It ranked as the third-largest navy in the world after the British and French navies. However, the vast force was too much of a burden for the collapsing Ottoman economy to sustain and it again fell into decline.

Now, a century after the foundation of the modern Republic of Turkey, the Turkish Navy is once again in the process of becoming a major force. That transformation resonates strongly with the political and social leanings of President Recep Tayyip Erdogan, who has developed an increasingly aggressive posture in foreign affairs, especially in the Mediterranean. Key to Erdogan's ambitions could be the nation's first light carrier, which is set to begin sea trials soon.

The TCG Anadolu, built at Turkey’s Sedef Shipyard in collaboration with Spain's Navantia, was launched last month. The ship was designed to be configured as a mini-aircraft carrier that could be deployed in the Aegean, Black, and Mediterranean seas, as well as the Indian and Atlantic oceans.

The future flagship of the Turkish Navy was based on Spain's SPS Juan Carlos I, a multi-purpose amphibious assault ship (LHD) that can be configured as a short take-off and vertical landing aircraft carrier.

Even though the warship is based on a Spanish design and was built in collaboration with a Spanish firm, all of the ship's systems were procured by the Turkish-based firms Aselan and Haveslan. The latter firm is responsible for designing the ship's computer network and other systems. The TCG Anadolu reportedly features the Turkish-made GENESIS-ADVENT combat management system, and aircraft landings are assisted by an Italian Leonardo SPN-720 Precision Approach Radar.

TCG Anadolu (Turkish for "Anatolia") is small compared to the U.S. Navy's carriers. The Turkish warship is 761 feet long and 105 feet wide. She is equipped with a 1,400 square meter well deck, which can be flooded to accommodate amphibious landing craft.

It was originally envisioned that Anadolu would operate the F-35B, the short take-off and vertical landing variant of the Lockheed Martin F-35 Joint Strike Fighter. However, Ankara was removed from the F-35 program in 2019 due to its acquisition of the Russian S-400 "Triumf" air defense missile system, and the Turkish Navy now plans to operate its indigenously-built Hürjet light trainer-attack aircraft from its warship. However, a catapult system may be required to launch the Hürjet while a hook system will be used to catch landing aircraft.

The ship is also designed to carry a naval version of the Bayraktar combat drone with a local engine developed by TUSAS Engine Industries, Asia Times reported. The domestically-produced Bayraktar TB-3, which is still under development, is designed to take off from and land on LHD-type ships using a simple roller system and rescue nets.

TCG Anadolu is scheduled to be commissioned later this year, and she could be just the first of Turkey's naval resurgence. The construction of a sister ship is currently part of the Turkish Navy's future plans. In the end, Ankara aims to become a regional power in the Mediterranean and serve as a maritime hub between Europe, Asia, and Africa.