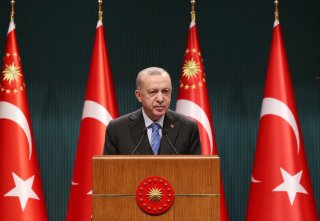 On Thursday, Turkey’s central bank committed to maintaining low interest rates for the foreseeable future, refusing to raise them to combat the country’s rapidly increasing annual inflation rate—estimated by independent analysts to be 60 percent for 2022, according to Reuters.

The central bank’s reluctance to raise interest rates is a reflection of the preferences of Turkish president Recep Tayyip Erdogan, who has repeatedly argued in defiance of most economists that high interest rates cause inflation rather than prevent it. Consequently, the central bank indicated that it would hold the country’s interest rate constant at 14 percent in anticipation of a future “disinflation process.”

Erdogan initially pressured the central bank to cut interest rates in 2021 to revitalize Turkey’s economy after the COVID-19 pandemic and encourage more growth. At the time, skeptical observers also speculated that the move was intended to strengthen the Turkish leader’s reelection prospects, as the country’s next election is next year and Erdogan faces flagging poll numbers and a united opposition.

However, although the Turkish economy continued to grow throughout 2021, the low interest rates also led to steadily increasing inflation rates, decreasing the value of the Turkish lira and prompting many Turks to transfer their holdings into dollars, further lowering its value in global currency markets.

Erdogan was briefly able to roll back the lira’s slide in late 2021 after guaranteeing the value of Turkish bank deposits, and his government has pursued other policies intended to prop up its value, including through purchases of lira on the open market and through regulations requiring Turkish exporters to exchange a fraction of their earnings in foreign currency for lira at the central bank. At the same time, Erdogan has attempted to secure further commercial ties for Ankara, particularly in the Gulf; the Turkish leader has pursued a growing relationship with the United Arab Emirates and Saudi Arabia, two rich Gulf nations historically regarded by Turkey as regional rivals.

In spite of these efforts, the lira resumed its climb in early 2022, and it is now trading at around 14 per U.S. dollar from a pre-inflation average of around 8.5.

Although Turkey remains a highly lucrative trading partner for Europe, and Turkish natural gas could become a critical substitute for Russian energy after the country’s invasion of Ukraine in late February, the country’s high inflation rate has discouraged broader commercial ties, with European investors largely remaining clear of the Turkish market since the onset of its double-digit inflation rate.