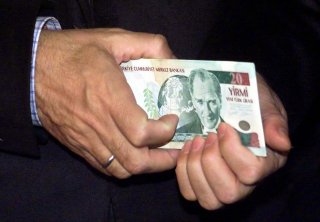 Turkish president Recep Tayyip Erdogan introduced a set of laws on Monday intended to prevent “dollarization” within Turkey and push the country’s citizens to save their money in lira—a decidedly unattractive proposal given that the Turkish lira has declined sharply in value since the beginning of the year.

“We are presenting a new financial alternative to citizens who want to alleviate their concerns stemming from the rise in exchange rates when they evaluate their savings," the Turkish leader said after the conclusion of a closed cabinet session.

In his plan, Erdogan claimed that he could guarantee the value of local currency deposits against the lira’s recent downward slide; although he did not provide exact details, he indicated that lira holders would be compensated by the government if the currency lost value against the U.S. dollar, helping to ensure the value of Turkish citizens’ savings.

After Erdogan’s remarks, the lira, which had previously plunged to a record low of 18.4 per dollar, saw a 25 percent increase to 12 per dollar. The head of the Turkish Banks Association claimed that $1 billion in dollars had been exchanged for lira after Erdogan’s announcement.

Despite the improvement of the lira, Erdogan’s economic problems are far from over. Much of the lira’s decline can be attributed to his decidedly unorthodox approach to economics, which has sought to prioritize low-interest rates, even as inflation has exceeded 20 percent. Although the lira has experienced a resurgence, it had previously lost as much as 60 percent of its value since the beginning of the year—40 percent in the months of November and December alone.

At its current rate of increase, Turkish inflation is expected to exceed 30 percent in 2022.

Another major concern for Erdogan concerns how his government would pay to insure citizens’ savings deposits, which could have substantial costs for Ankara if the lira’s value resumes its decline.