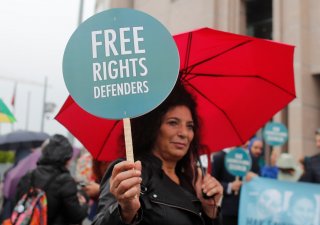 A Turkish court decided in a Friday hearing that Turkish businessman and philanthropist Osman Kavala, who has been imprisoned since 2017, should remain in jail until his trial takes place, based on the seriousness of the charges against him.

Kavala, a long-time human rights activist, has been accused of belonging to a “terror” group and attempting to violently overthrow the Turkish government. He is being tried alongside fifty-one other defendants; the decision to merge their trials has been criticized by human rights organizations, who have argued that doing so prevents the defense from examining any individual case in detail.

Kavala was also charged with helping to organize and finance Turkey’s 2013 Gezi Park protests, which drew millions of Turks to protest against the perceived authoritarianism of Turkey’s then-Prime Minister, Recep Tayyip Erdogan before the park’s occupants were dispersed in a crackdown. Erdogan, who was elected to the presidency in 2014 and dramatically expanded the post’s powers in a constitutional referendum, also faced an unsuccessful coup attempt in 2016. In its aftermath, thousands of dissidents and other members of Turkey’s political opposition were arrested and charged with aiding the coup, including Kavala.

The hearing was observed by representatives from the European Union, as well as American and other European diplomats. The European Court of Human Rights has requested that Kavala be released—a request that Turkey has ignored, possibly hurting its diplomatic standing in Europe.

The United States has also objected to the proceedings; “The specious charges against Kavala, his ongoing detention, and the continuing delays in the conclusion of his trial, including through the merger of cases against him, undermine respect for the rule of law and democracy,” State Department spokesman Ned Price said in a February 2021 statement.

Kavala has disputed the charges against him, describing them as “fantastic” and “based on conspiracy theories overstepping the bounds of reason,” according to Al Jazeera.

In previous trials, Turkish courts have agreed. Although Kavala was imprisoned without trial from 2017 until 2019, his first trial took place from March 2019 until February 2020 and resulted in his acquittal. Hours after he was acquitted, however, Turkish prosecutors pressed new charges, accusing him of engaging in a conspiracy with U.S.-based cleric Fethullah Gulen, the leader of a Turkish political movement that Erdogan has accused of supporting the 2016 coup attempt.

Kavala has also been tied to Hungarian-American billionaire and frequent subject of conspiracy theories George Soros, after he helped to found the Turkish branch of Soros’ Open Society Foundations. That branch ceased operations in 2018 after Erdogan accused Soros of attempting to destabilize the Turkish government.

Kavala’s next hearing is scheduled to take place on November 26.