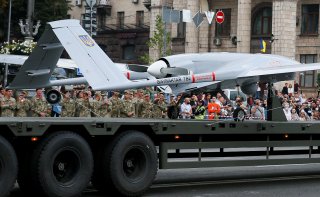 Javelin anti-tank missiles, Stinger anti-aircraft weapons, and advanced air defenses are all contributing to Ukraine’s effort to stop the Russian invasion. However, there is a critical and less discussed system that appears to be having a massive impact in Ukraine. A number of reports suggest that Ukrainian forces are effectively using Turkish-made TB2 drones to disable and destroy Russian armored vehicles and tanks.

The Bayraktar TB2 has been used by Ukrainian forces to hover above and target Russian armored vehicles and maneuver formations. “They have been very effective using [TB2s]. We assess that they still have a significant majority of their inventory left … they are using them … quite skillfully,” a senior Pentagon official told reporters on March 14.

Although specifics about what exactly is being provided to Ukraine are largely not available for security reasons, Pentagon officials are clear that key supplies continue to reach Ukrainian fighters. While praising the effectiveness of the Turkish TB2 drones, a senior official added that the United States is “talking to allies and partners … about capabilities that we think the Ukrainians need most to defend themselves.” The TB2 drone “is certainly one of those,” the official noted.

A lower-flying attack drone of this kind could prove quite impactful as a method of attack against armored vehicle convoys. The Pentagon and others have been very clear that Russia’s S-400 air defenses appear to have shut down the airspace above much of the country. However, those systems might not be capable of tracking and intercepting lower-altitude threats in the air, including TB2 drones.

Ukrainian drone operators may be able to leverage buildings or uneven terrain to conceal the drone so that Russian forces do not see them in time to target them. Maneuvering Russian forces have crew-served weapons or small arms for short-range attacks and long-range missile defenses intended to take down aircraft. However, the Russians may not have an adequate short-range air defense system to target the TB2 drones with. Most vehicle-mounted cannons on Russian armored vehicles are not engineered for air defense missions like counter-drone operations. As a result, advancing Russian forces may be operating with a defensive “gap” in their short-range air defenses, making them vulnerable to air attacks from Ukraine’s Turkish drones.