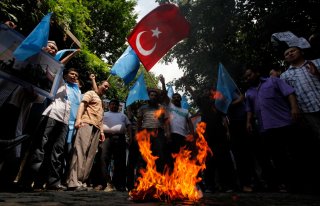 A group of Uyghurs living in Turkey has filed a criminal complaint against more than one hundred Chinese government officials, accusing them of crimes against humanity for the government’s treatment of Uyghurs in China’s westernmost province, the “Xinjiang Uygur Autonomous Region.”

The complaint was filed on Tuesday at the Chief Prosecutor’s Office in Istanbul, Turkey’s largest city. The group’s lawyer, Gulden Sonmez, indicated that the complaint was necessary because international organizations had failed to act against Beijing’s practices in the province.

China has previously been accused of engaging in human rights abuses against the predominantly-Muslim Uyghurs in Xinjiang. Around one million members of the ethnic group have been placed in concentration camps within the province, where they have been subject to forced labor, rape, and in some cases forced sterilizations and abortions. Several Western governments, including the United States, have described the treatment of the Uyghurs as a genocide, and the Biden administration has effectively banned imports from Xinjiang on that basis.

China has vigorously defended its practices in Xinjiang against Western critics. It has described the camps as vocational training centers designed to combat Islamic extremism and has denied accusations of abuses against the camp’s residents.

The criminal complaint was filed on behalf of 116 people who it alleges are still imprisoned within the Xinjiang camps. It named 112 Chinese nationals, many of them members of the Chinese Communist Party (CCP), who served as administrators at the camps.

“The International Criminal Court should have already started this trial, but China is a member of the [United Nations] Security Council and it does not seem possible within this dynamic,” Sonmez told a demonstration outside of the city’s main court. A number of protesters in attendance waved the blue-and-white flag of “East Turkistan,” an unrecognized government-in-exile that claims sovereignty over Xinjiang.

Around 50,000 Uyghurs currently live in Turkey, one of the largest Uyghur diaspora populations in the world. Uyghurs are usually included within the broader Turkic family of ethnicities, and the Uyghur language is very similar to Turkish.

Although charging the Chinese government for its own practices within its own territory would nominally be a violation of its sovereignty, Turkish courts recognize the principle of universal jurisdiction for human rights abuses—a widely-recognized principle that allows heads of state to be prosecuted for crimes against humanity by external organizations such as the International Criminal Court. Additionally, at least one of the 116 imprisoned Uyghurs named in the complaint is a Turkish citizen.

The Chinese Embassy in Turkey did not comment on the complaint.