Type 99 Tank: How China Is Preparing for a Land War 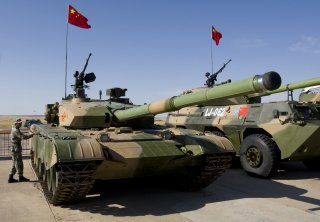 China’s most advanced main battle tank (MBT), the Type 99 is an impressive showcase of the People’s Liberation Army’s rapid early modernization drive of the 2000s.

The Norinco ZTZ-99, better known as the Type 99, has its roots in the late 1990s efforts by the People’s Liberation Army to design a new third-generation MBT platform. The short-lived Type 98 entered state trials in 1996 and was publicly unveiled in the following years. As it later turned out, the Type 98 was ultimately a pre-production design for what soon became the Type 99 MBT.

Introduced in 2001, the Type 99 improved on its Type 88 predecessor in several key ways. Whereas the Type 98 borrowed heavily from the Soviet T-72, the Type 99 is more of a blend of Russian and western design influences. The Type 99 features a ZPT-98 125-millimeter smoothbore gun with a carousel-style auto-loader, fit for automated as well as manual control. As with other MBT’s in its class, the gun is compatible with a wide range of ammunition that includes high explosive anti-tank and high-explosive fragmentation rounds. It also carries the popular Soviet 9M119 Refleks series of anti-tank guided missiles, license-produced by China. The Type 99’s turret and portions of its front hull boast explosive reactive armor, a major boon to survivability. The Type 99 comes with a hefty fifteen hundred horsepower diesel engine, which, considering the tank’s relatively lightweight of fifty-five tons (for comparison, the baseline U.S. M1 Abrams comes in at sixty tons with some variants exceeding seventy), offers good mobility at a power-to-weight ratio of just under twenty-eight horsepower/tons.

The Type 99’s fire control system is capable of reliably tracking moving as well as stationary targets and offers thermal imaging capabilities and weather sensors, as well as data link and GPS integration. Some of these features are present on several of the latest variants of the advanced Soviet T-90 tank. Also a fairly common feature of late Soviet and Russian tanks, the Type 99 comes with a standard countermeasures package that includes a laser warning receiver and obfuscatory smoke grenades. The hull and turret are built with a bespoke modular design, meant to extend service life while allowing for low-cost refits.

The Type 99 has not seen significant revisions since its introduction. The marginally improved Type 99A, which offered new angled armor, slightly revised interior design, and a more robust explosive reactive armor layout, is believed to be the standard production Type 99 as of the early 2010s.