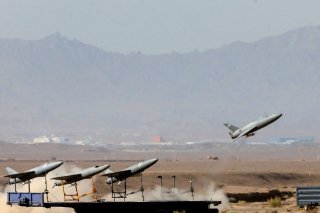 Thousands more Iranian drones may be headed to Ukraine as Russian forces continue to use them to attack armored vehicles, air defenses, troop concentrations, and mobile artillery.

A senior Pentagon official did not confirm the exact number of Shahed 136 drones being used to support the Russian effort but made it clear that such an initiative would not be surprising. The Iranian “kamikaze” drones are a loitering munition that can attack from ranges as far as 2,500 kilometers away.

“We do know that Iran has provided Russia with drones for use on the battlefield in Ukraine. While I don't have anything specific to provide in terms of potential future deliveries, it would not -- we would not be surprised were that the case,” a Pentagon official told reporters during a background briefing.

These kinds of weapons present a serious threat to Ukrainian forces as they can be quite difficult to defend against. Large numbers of swarming drones would be quite difficult to target with any kind of kinetic interceptor. These systems also operate at a lower altitude and can be organically launched from dismounted units in close proximity. Finally, these kinds of drones could conduct intelligence, surveillance, and reconnaissance (ISR) missions as well, making Ukrainian armored vehicles, formations, or artillery systems vulnerable to attack.

Electronic warfare systems might be the best means of defending against individual kamikaze drones since an electronic signature might be able to blind, jam, or disrupt groups of drones. The range of these drones could also prove problematic and Ukrainian forces operating at safe standoff distances beyond the range of Russian artillery could wind up becoming unexpectedly vulnerable.

However, a report from Newsweek quoted the General Staff of the Armed Forces of Ukraine stating that its forces have shot down and destroyed sixteen Iranian drones. This means that Ukrainians are likely learning more about this airborne threat and working on innovative ways to counter it.