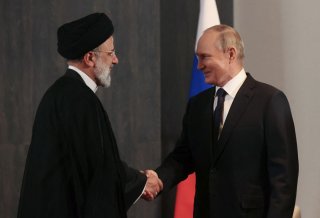 The U.S. National Security Council (NSC) claimed on Thursday that the Iranian military was “directly engaged on the ground” in Russia’s ongoing invasion of Ukraine. Members of the Islamic Revolutionary Guards Corps (IRGC) reportedly stationed in the Crimean Peninsula are helping train Russian troops on the use of newly purchased Iranian drones.

“Tehran is now directly engaged on the ground and through the provision of weapons that are impacting civilians and civilian infrastructure in Ukraine,” NSC spokesman John Kirby said during a press conference. Kirby also noted in his remarks that Russian pilots were piloting Iranian drones during bombing raids on Kyiv and claimed that the White House was “concerned” that Russia would attempt to purchase “advanced conventional weapons” from Tehran, including short- and medium-range surface-to-surface missiles which Iran has developed and spread to its partners throughout the Middle East.

Russia has repeatedly denied purchasing Iranian drones for use in Ukraine and Iran has repeatedly denied selling them. However, Kirby claimed that the United States had proof that both nations had lied and would “pursue all means to expose, deter, and confront Iran’s provision of these munitions against the Ukrainian people.”

Kirby claimed that Iranian drone operators had traveled to Crimea to participate in the conflict after Russian users claimed that the drones “were suffering failures and not performing to the standards that apparently the[y] expected,” leading the Iranians to “move in with some trainers and technical support.”

However, Ukrainian leaders, including President Volodymyr Zelenskyy, have emphasized the role of Iranian drones in the ongoing bombing campaign against Ukrainian cities, arguing that Russian equipment losses made the Iranian drones central to its efforts.

“We kn[o]w that Iran is trading with Russia with Shahed drones [and] missiles,” Ukrainian president Volodymyr Zelensky told Canada’s CTV television network during an interview on Wednesday. “Iran publicly denied all that, but here we see hundreds of strikes … Iran is supplying drones that have killed Ukrainians and keep killing. It’s not one to five. It’s not an accident. It’s hundreds.”

Iran is currently embroiled in protests surrounding the death in police custody of Mahsa Amini, a Kurdish woman arrested by Iran’s morality police for failing to properly wear a headscarf. The protests have since spread to nearly all Iranian cities, and the ensuing government crackdown has led to further U.S. and Western sanctions on Iran’s leadership. Kirby indicated during his remarks that further nuclear negotiations with Iran—which would suspend its nuclear program but would provide billions of dollars in economic relief—were not being actively pursued.

“We’re not focused on … diplomacy at this point,” the spokesman said. “What we are focused on is making sure that we’re holding the regime accountable for the way they’re treating peaceful protesters in their country.”