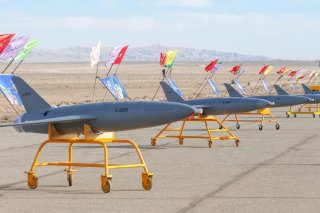 Israel’s Defense Minister Benny Gantz warned on September 12 that “Iran is training militias from Iraq, Yemen, Lebanon and Syria to employ advanced UAVs [Unmanned Aerial Vehicles], in a base called Kashan.” The new revelations came a month and a half after Israel, the United States, and the United Kingdom blamed Iran for a drone attack on the Mercer Street tanker off the coast of Oman. Two crew members were killed.

Gantz delivered the remarks at the annual International Institute for Counter-Terrorism (ICT) Conference at Reichman University. “Iran has developed ‘proxy terror’ which is perpetrated by organized ‘terror armies’ which are assisting Iran in achieving its economic, political, and military goals. One of the most significant tools employed by Iran and its proxies is UAVs with a range of thousands of kilometers. Hundreds of these UAVs are spread across Yemen, Iraq, Syria, and Lebanon. Iran is also attempting to transfer the know-how needed for UAV production to Gaza,” he said.

In May, members of Hamas used new Iranian-style drones for the first time. Israel shot them down using its Iron Dome air defense system and other methods during the conflict. An Iranian drone, flown from Syria, also penetrated Israeli airspace in May. Israel also shot it down. However, Iranian drone threats and the use of Iranian drones by groups in Iraq, Syria, Lebanon, and Yemen have become a feature of the Middle East in recent years. The Iranian-backed Houthis in Yemen often use drones against Saudi Arabia. Iran used drones to attack Saudi Arabia’s Abqaiq in September 2019. In addition, pro-Iranian militias in Iraq frequently target U.S. forces using drones. A drone attack on Erbil on September 11 was the latest incident.

“The Kashan base located north of the city of Isfahan is used to train terrorists from Yemen, Iraq, Syria and Lebanon. These terrorists are trained to employ UAVs produced by Iran. This base is a key point from which Iranian aerial terrorism is exported to the region,” Gantz said. This is an important shift because Israel alleges Iran is now training drone operators in Iran. Israel is upping the rhetoric against the Iranian drone threat. This comes several years after Israel raised the alarm about Iranian precision-guided munitions, or PGMs. At the time, Israel was concerned Iran was moving these munitions through Syria from Iraq to Hezbollah in Lebanon, or even seeking to have Hezbollah build them locally. Precision munitions, including drones, can target strategic infrastructure. This means they pose a larger threat. Israel has improved its air defense capabilities in recent years, through a close partnership with Washington. Israel has also taken delivery of four Sa’ar 6 advanced corvettes that will have the naval version of Iron Dome and IAI’s Barak MX air defense system.

Gantz warned at the same conference about Iran’s nuclear program. “Iran does not honor the agreements it has signed, and there is no reason to believe that it will honor any future agreements. The time has come for action.  I call on the countries that are still members of the nuclear agreement to impose the sanctions set out in the agreement. It's time to make a ‘snapback.’” He also warned about Iran’s use of proxies in the region.

Israel has been increasing exercises with the United States and other international partners. These include numerous recent drills with the F-35 Joint Strike Fighter, of which Israel is a frequent user of the fifth-generation aircraft. Israel is also now under the U.S. Central Command (CENTCOM) region, a development that assumes more cooperation with CENTCOM officers. Recently CENTCOM has had to deal with the blowback from the withdrawal from Afghanistan and questions about the continued U.S. role in Syria and Iraq. The Iranian drone threat, which Israel has highlighted, will likely continue to affect U.S. forces in Iraq and Syria.