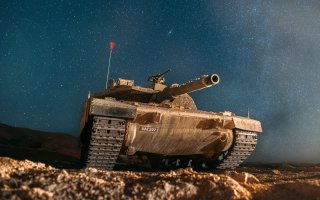 In August 1990 Iraq invaded Kuwait. At the time Baghdad had one of the world’s largest armies with almost a million men under arms and some 4,500 tanks. It also had almost 500 aircraft and hundreds of helicopters. This was a formidable force. However, within six months it would be decimated by a large coalition assembled by the United States.

The air war which began against Iraq more than thirty years ago was revolutionary in its use of technology. For more than a month Iraq’s command and control, air defense and military units were systematically destroyed. There were around 100,000 coalition aircraft sorties. Today’s battlefield has been built on the legacy of the technology used in that war. The precision weapons, cruise missiles and attempt to wage war quickly and with more lethality, but fewer civilian casualties, are hallmarks of the 1990s. For countries like Israel, which is at the forefront of building artificial intelligence into military platforms and munitions, this has major ramifications. Israeli defense companies are pioneering a plethora of systems that are changing the battlefield, from sea-skimming missiles like fifth-generation Sea Breaker to new air defense systems and using drones in unique ways. For Israel warplanes like the F-35 form the background of the sensor-driven data battlefield.

Israeli defense experts at companies like Rafael Advanced Defense Systems, one of the heartlands of Israeli research and development, have key insights into how war has changed since 1991. Gideon Weiss, Rafael’s Vice-President for Marketing and Business Development, is an expert on air warfare.

He looks back at the warplanes available in 1990 such as the F-4 Phantom, Tornado multirole fighter jets, F-15 Eagles and F-16 Fighting Falcons, as well as the F-117 stealth bombers, B-52 strategic bombers and A-10 Warthogs. Some of these platforms still exist and would be used today on the battlefield. B-52s, for instance, regularly are used as symbols of U.S power in long missions to show the flag. “I think that it’s not just the F-35 that would change the scenario. It is two or three main items: One is the ability to fight at standoff. In those days stand-off was just a few kilometers and now it is more than 100 kilometers. In those days the only standoff weapon was the Tomahawk cruise missile. And what was considered standoff is GBU-15. That is not really standoff. You are engaged with your target,” he says.

In addition to standoff capabilities, enabling pilots or operators to be further from a target, the battlefield is also impacted by developments in electronic warfare and GPS-denied environments. That means electro-optic precision strikes and the ability to use software are important. With new software-defined radios, for instance, every node of the battlefield can be connected in a kind of netcentric war.

One issue for those in the Gulf War was that they ran out of planned targets after the first several days. Artificial intelligence and sensors that sponge up information can help in finding new targets. Rafael makes missiles such as the Spice family of air-to-surface missiles, the Python and other advanced munitions, as well as the RecceLite reconnaissance pod. That pod is used by air forces around the world from Israel to Italy, India, Germany and Columbia. Rafael also makes the Litening targeting pod used on planes like the F-16. Weiss says that these systems would have enabled more standoff capability and are also able to acquire targets continuously, thus influencing the battle faster. What that might mean is that instead of thirty-three days of bombing, there would be several days. More would be accomplished, faster and with less ordnance.  That is the heart of Israel’s Momentum plan today, the idea of making systems more lethal and having fewer mistakes on the battlefield while pushing intelligence to the frontline troops and planes as fast as possible. This means closing the loop of the “sensor to shooter.”

Weiss also notes that air defense has changed vastly since 1990. Saddam Hussein ordered Scud missile attacks on Israel in 1991. This shocked Israel because there were few defenses, except the new U.S. Patriot system. Today Rafael has produced the Iron Dome and David’s Sling air defense systems and Israel also makes the Arrow system. The United States has supported and worked closely with Israel on air defense systems. Iron Dome, in the recent May war against Hamas, continued to have over a ninety percent effective rate of downing threats, including drones. In the next several years Israel may also field lasers to bolster its multi-layer air defense. That is a major change from 1991 when countries were largely naked in protecting themselves from ballistic missiles. The air defense systems give politicians and planners more time to decide what to do in war.

The weapons that have changed the modern battlefield employ unique capabilities, such as using gliding techniques to reach longer standoff ranges of around 100 kilometers. Weiss points to various Israeli systems that provide precision standoff, such as the Popeye missile, and the Spice 250. Multiple autonomous weapons that can strike targets in GPS denied environments using artificial intelligence is an aspect of the modern battlefield.

Modern weapons mean pilots can carry fewer munitions and do more with them. “If you look at the economics of a mission, how many weapons do I need to drop on a target element to make sure it is eliminated and how many aircraft do I have to put in the air to carry all those weapons and the probability of success given those parameters,” says Weiss. This means a jet can stand off by some 100km, fire its weapons, avoid S-300 and S-400 missile defense systems and also get through countermeasures. “The probability for mission success is higher to navigate and pinpoint so you can carry less weapons to guarantee mission success.” That means rather than a whole squadron of F-16s being sent with four weapons per plane, you can do more with less.

Another area is surveillance. Using drones or other methods, you can have better images with more clarity and more pixels. “This means the resolution on the ground from the given stand-off distance has increased by thousands of times,” says Weiss. Using automatic target recognition and AI and other methods can mean finding targets that move around faster than the methods used in the Gulf War, where after the pre-planned targets were struck, they had to create new target banks. That means regenerating intel in 1991, intelligence that would be regenerated faster now. It can also mean lower civilian casualties, such as the disastrous February 13 bombing of the Amiriyah shelter bombing that killed 400 civilians. “Even if a valid target pops up in a friendly zone, so you can make a whole new process of verification.”

Big data has also changed war, due to the amount of information that is being collected now. “I think in those days there was a limited amount of data that could be collected on SIGINT (Signal Intelligence), all the SIGINT and COMINT (Communications Intelligence) and ELINT (Electronic Intelligence) and command and control intelligence all that was very limited, today there are a lot of new capabilities that cannot be integrated,” says Weiss.

Another change in the way the Gulf War would be fought today is in the mission to identify Scud launchers in Iraq’s western Anbar desert. This “great Scud hunt” was difficult because of the huge amount of space that had to be searched. Now with better sensors and persistent surveillance, such as using drones, would likely find them faster. Also, the need to find the Scuds would be reduced because of better anti-ballistic missile defenses that exist now.

Other issues that led to casualties in the Gulf War, such as friendly fire, would likely be reduced by better communications and networks. In addition, Active Electronically Scanned Array (AESA) radar technology which is used today for Synthetic Aperture Radar (SAR) radar provides centimeters and inches of resolution instead of tens of meters, says Weiss.

The combination of these new technologies would make the war more precise and lethal and have more accomplished in a shorter time. Of course, the enemy is not standing still today either. Near-peer adversaries are fielding new systems as well, which means modern militaries will have to study how to defeat systems designed to counter the new digital battlefield.