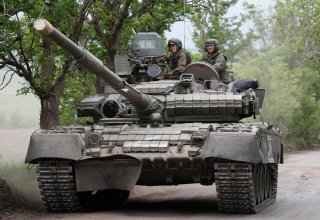 As war rages on in the country’s east, Ukraine’s top officials say they have ruled out a ceasefire and concessions to Russia.

Presidential adviser Mykhailo Podolyak, who announced last week that Ukraine has withdrawn from sputtered peace talks between Kyiv and Moscow, told Reuters that a ceasefire and territorial concessions would accomplish little other than to give Russian forces time to regroup for a larger and more destructive offensive. "After a while, with renewed intensity, the Russians will build up their weapons, manpower and work on their mistakes, modernise a little, fire many generals. … And they'll start a new offensive, even more bloody and large-scale,” he said.

"The war will not stop [after any concessions]. It will just be put on pause for some time," Podolyak argued. Podolyak dismissed Western calls for an urgent ceasefire as “very strange,” adding that there can be no peace talks until Russian forces vacate all occupied parts of Ukraine.  "The [Russian] forces must leave the country and after that the resumption of the peace process will be possible," he said.

Podolyak called on Western governments to back Kyiv’s emerging maximalist aim of decisively defeating Russia. "It would be good if the European and U.S. elites understand to the end: Russia can't be left halfway because they will [develop] a 'revanchist' mood and be even more cruel ... They must be defeated, be subjected to a painful defeat, as painful as possible,” he said.

Podolyak’s remarks were echoed by other top members of President Volodymyr Zelenskyy’s administration. "The war must end with the complete restoration of Ukraine's territorial integrity and sovereignty. That is, our victory," tweeted Andriy Yermak, head of the Office of the President of Ukraine. “Our common victory with the civilized world. After all, today Ukraine is defending not itself only.”

Zelenskyy said earlier in May that he sees the restoration of pre-invasion borders—that is, the unconditional withdrawal of all Russian forces to pre-February 24 positions—as a prerequisite for resuming peace talks with Russia. The Kremlin, however, appears to have ruled out ceding any of the eastern and southeastern territories captured by Russian forces since the invasion commenced. According to Russian state media reports, Moscow is mulling plans to absorb the major southeastern city of Kherson into Russian-annexed Crimea. Other major cities, including the port hub of Mariupol, will reportedly stay under the continued administration of the Russia-backed separatist Donetsk People’s Republic.