Ukraine Shows How to Fight Back Against Tanks 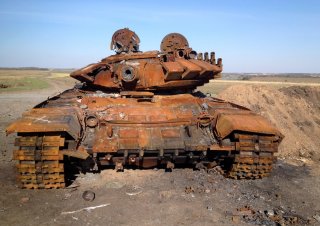 Ukrainian fighters have had great success using top-down attacks with Javelin anti-armor weapons against Russian tanks, a tactical approach that has helped fight back against Russia’s invasion. Tanks are generally known to be most vulnerable to top-down attacks as there is less armor protection. Ukrainians armed with U.S.-provided Javelin anti-tank missiles used dispersed formations, terrain, and buildings at points of attack on approaching Russian armored vehicles.

Certainly, top-down attacks on tanks are something combat forces have known for years, yet the effectiveness of anti-armor weapons against Russian tanks has sharpened global focus on the kinds of Active Protection Systems being developed for armored vehicles. For instance, the situation in Ukraine has inspired the Marine Corps to decrease the amount of its Abrams tanks in favor of faster-moving, dispersed yet highly lethal anti-armor weapons. Ukrainian tactical success has also inspired major weapons developers to look for innovative ways with which to protect tanks and armored vehicles from RPGs and anti-tank-guided missiles.  In the case of the General Dynamics Land Systems (GDLS) new AbramsX tank variant, senior weapons developers are engineering a new Active Protection System (APS) to defend against top-down attacks.

As part of an effort to sustain survivability and enable heavy protection on a lighter-weight vehicle, GDLS is working with partners to build a “hemispheric” APS able to sense, track, and intercept incoming enemy RPGs and anti-tank missiles. Interestingly, the GDLS APS is built with the ability to protect the tank from top-down anti-armor attacks. While hemispheric APS has been an ongoing goal for armored vehicles, events in Ukraine undoubtedly influenced or informed the GDLS Active Protection System. Ukrainians have had great success destroying Russian tanks by firing top-down missile attacks at the more vulnerable top part of a tank. APS systems work in an incremental way, wherein a sensor detects an approaching or incoming anti-tank missile or RPG, and then uses an integrated computer-enabled fire control to cue and launch an interceptor of some kind to knock out or destroy the incoming attack.

“We are learning from operations around the world that the threat to anything on the ground increases every day, so we have collaborated with one of our partners to demonstrate how a current APS system can be used to provide coverage on the top of the donut by orienting its radar and launcher system skyward for defense against that top attack threat,” Tim Reese, director of U.S. business development at General Dynamics Land Systems, told The National Interest in an interview.