UN Calls for Ceasefire After Ethiopia's Tigray Truce Breaks Down 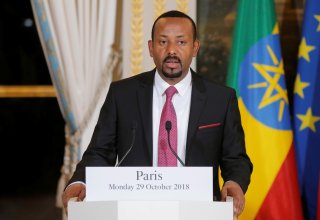 The Secretary-General’s remarks came after fighting broke out in southern Tigray between the two sides, violating an existing ceasefire that had been in place since March. Both sides accused the other of initiating the violence and insisted that they had only responded to repeated provocations from the other. Although the TPLF and the administration of Ethiopian prime minister Abiy Ahmed had traded mutual recriminations for months, Wednesday’s violence represented the only major deviation in the five-month truce.

Guterres did not seek to assign blame to either side in his statement, claiming only that he was “deeply shocked” by the fighting and urged both sides to immediately resume adherence to the truce. Other officials also condemned the violence, including African Union Commission leader Moussa Faki Mahamat, who called for “talks to seek a peaceful solution” to the conflict.

Throughout the ceasefire, TPLF and Ethiopian officials have engaged in sporadic peace efforts, but they have failed to come to a substantive agreement over political differences. Abiy had previously voiced support for an African Union-mediated peace agreement led by former Nigerian leader Olusegun Obasanjo, but the TPLF has rejected Obasanjo’s mediation and denounced the AU as biased in favor of the Ethiopian government. The group has also demanded the restoration of banking and telecommunications services to Tigray—both of which have largely been unavailable in the region since the beginning of the war in November 2020—as a precondition for negotiations. In turn, Abiy has argued that TPLF officials were “refusing to accept peace talks,” citing this as a justification for continuing the conflict.

While the civil war had lowered in intensity during the ceasefire, allowing for the restoration of some economic activity in the conflict areas, Ethiopia remains deeply embroiled in a humanitarian crisis. Thousands of people have been killed in the fighting over the past two years, and much of the country faces acute food insecurity from bad harvests, the negative economic impact of the war, and the pressure on global grain supplies caused by the ongoing Russian invasion of Ukraine. World Health Organization Director-General Tedros Adhanom Ghebreyesus, an Ethiopian citizen, described the conflict as “the worst disaster on Earth” in mid-August and speculated that it had received far less attention than the conflict in Ukraine due to the victims’ skin color.