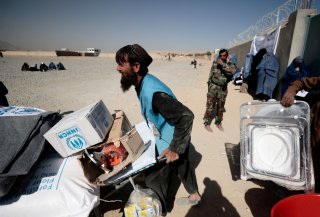 United Nations Secretary-General Antonio Guterres has urged the Taliban-led government of Afghanistan to uphold its prior commitment to ensure that women’s rights are protected. Notably, Guterres suggested that doing so would make it easier for foreign governments to provide badly needed assistance to head off the country’s nascent famine.

“Afghanistan is hanging by a thread,” Guterres ominously warned on Wednesday. The country’s international supply chains have been severely damaged or severed in the aftermath of the Taliban’s seizure of power in August 2021, and many outside observers have warned that most of the country’s families have fallen into poverty since the takeover.

“We urge the Taliban to seize this moment and garner international trust and goodwill by recognizing—and upholding—the basic human rights that belong to every girl and woman,” Guterres said at a meeting of the UN Security Council.

He also warned that the international community looked poorly on reported incidents of kidnapping against female activists and “strongly appealed for their release.”

At the same time, Guterres was highly critical of Western attempts to impose continuing sanctions against Afghanistan. Although the country’s war ended in August, some governments have continued to pursue sanctions out of concern that the Taliban—which continues to be designated as a terror group by several governments, including Canada—could benefit financially from commerce with the West. The United States has declined to engage with the militant group and has rejected the Taliban’s requests to access the $10 billion in U.S. bank deposits that were owned by the previous government.

Guterres warned that this approach ignores the fact that innocent Afghan civilians, who are facing “extreme levels of hunger,” would perish from a lack of Western aid.

“Some families are selling their babies to purchase food,” Guterres claimed, echoing Chinese UN ambassador Zhang Jun’s report that a woman sold her daughters and one of her kidneys in order to feed her family.

Zhang described the events as a “human tragedy” that the United States had the power to stop by lifting its “unilateral sanctions.”

In calling for increased aid to Afghanistan, Guterres highlighted the possibility that a refusal to loosen restrictions on commerce and aid could fuel extremism among the population.

“Without action, lives will be lost, and despair and extremism will grow,” the UN leader said.