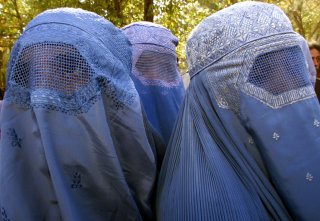 A Friday decree issued by Emir Hibatullah Akhundzada, the leader of the Taliban, has banned forced marriages within Afghanistan, which the militant group has now ruled for nearly four months.

The decree was put out by the “Emir of the Islamic Emirate of Afghanistan,” the Taliban-led state that succeeded the government of President Ashraf Ghani after the August 2021 fall of Kabul. It claimed that men and women “should be equal,” that women could not be regarded as “property” within the country, and that their consent to a marriage would be protected by law.

It remains unclear if this decree will change the reality on the ground in many rural areas where women continue to lack de facto access to education and employment. The decree also did not provide any protections for women’s work or education, or specify a minimum age for marriage, which was set at sixteen by the Ghani government prior to its collapse. It did, however, specify that a widow would be free to remarry a husband of her choice seventeen weeks after the death of her husband.

Conscious of its perception abroad as a misogynist state, the Taliban government has made gestures intended to reassure international viewers that women’s rights would not be eliminated under the new government. Consequently, the group’s courts have issued rulings ostensibly requiring the fair treatment of women and protecting the inheritance of widows. Although it eliminated the previous government’s Ministry of Women’s Affairs and replaced it with the “Ministry for the Promotion of Virtue and the Prevention of Vice,” which operated the group’s religious police during its control over the country from 1996 until 2001, its officials have also reportedly encouraged respect for women among the group’s rank and file.

Since his accession to power in Kabul, Akhundzada has remained out of the limelight, returning to the southern city of Kandahar, the Taliban’s birthplace and historic stronghold, and issued decrees implemented by other members of his inner circle, who have taken positions of power in the country’s interim government. Several members of that government, including Interior Minister Sirajuddin Haqqani, continue to have U.S. bounties on their heads from America’s twenty-year war in the country.

Afghan women’s rights activists and international observers gave mixed reactions to the decree, although even the most optimistic noted that it remains to be seen if it will be properly implemented. Some observers also suggested that the move was intended to convince the U.S. government to release the $10 billion in frozen assets from the previous government, which the Taliban has urgently requested to help it overcome significant food shortages in the upcoming winter.