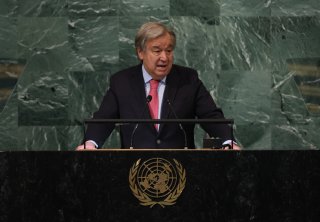 United Nations (UN) secretary-general Antonio Guterres sounded a note of alarm during the group's most recent summit, claiming that international politics had been “gridlocked in colossal global dysfunction” obstructing efforts to resolve ongoing crises including the Russo-Ukrainian War and the continued threat of climate change.

“Our world is in peril, and paralyzed,” the secretary-general said in his opening remarks before the UN General Assembly at its seventy-seventh annual meeting. In his speech, Guterres emphasized that the paralysis in global negotiations had inhibited the work of the UN Security Council, undermined international law, and eroded trust in democracy around the world—ultimately “undermining all forms of international cooperation” on which the UN relied.

Guterres also stressed that the root cause of the world’s problem had been a “divergence between developed and developing countries, between North and South, between the privileged and the rest,” which he suggested helped to explain a lack of cooperation between nations when confronting transnational issues such as the Covid-19 pandemic and the war in Ukraine. He emphasized the interconnected nature of global problems, observing that the conflict in Ukraine had obstructed grain exports to Africa and had exacerbated a potential famine there.

“No power or group alone can call the shots,” he said. “Let’s work as one, as a coalition of the world, as united nations.”

Although he expressed serious concern at existing political trends, Guterres also expressed gratitude to officials and negotiators who had achieved success in several areas—notably the Russian, Ukrainian, and Turkish diplomats who secured the safe passage of grain from Ukrainian ports through the Black Sea. During his remarks, the secretary-general showed a photograph of the first Ukrainian grain ship transporting its cargo to the Horn of Africa, which has experienced acute food insecurity following the onset of Ethiopia’s civil war in its northern Tigray region.

“At its essence, this ship is a symbol of what we can accomplish when we act together,” Guterres said. “It navigated through a war zone—guided by the very parties to the conflict—as part of an unprecedented comprehensive initiative to get more food and fertilizer out of Ukraine … to bring desperately needed relief to those in need.”

“Some might call it a miracle on the sea,” he added. “In truth, it is multilateral diplomacy in action.”