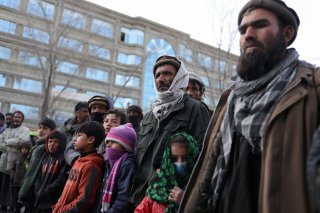 A report released on Monday by the UN High Commissioner for Human Rights said that violent attacks had taken the lives of nearly four hundred Afghan civilians, and injured seven hundred fifty others since the Taliban’s seizure of power in Afghanistan in August 2021.

The UN report covered the period from August 2021 until the end of February 2022. It is the first such report released since the Taliban’s takeover. It estimated that 80 percent of the period’s casualties had occurred during attacks linked to the Islamic State’s “Khorasan Province,” or ISIS-K.

The report also noted that around fifty suspected members of ISIS-K had been subjected to extrajudicial execution in the same period, with some bodies displaying evidence of torture.

Michelle Bachelet, the UN’s High Commissioner for Human Rights, described the report’s conclusions as “of profound concern” in a statement introducing it.

Bachelet singled out the dangers posed by ISIS-K suicide attacks during the same period, noting that they had especially targeted “Shia Muslims, mostly from the Hazara ethnic group.” The Hazara, one of Afghanistan’s recognized ethnic minority groups, are predominantly Shia, while most other groups are predominantly Sunni. Consequently, they have been victims of sectarian persecution since the onset of the country’s armed conflict – including by the Taliban during the group’s initial ascent to power during the 1990s and its twenty-year insurgency from 2001 to 2021. After its return to power, the Taliban-led government insisted that the Hazara would be protected, although it has not appointed any Hazaras to high-level government positions, as it reportedly has with several other minority groups.

ISIS-K emerged in eastern Afghanistan in 2014 and persisted throughout the final stages of the U.S. insurgency with minimal support. Outside observers believe that it has gained followers since the Taliban takeover, largely recruited from former members of the Taliban disgruntled at its accommodation with the Western powers and its refusal to pursue militant Islamism beyond Afghanistan’s borders. The group has been responsible for several high-profile terror attacks within Afghanistan, including a suicide attack on the Hamid Karzai International Airport during the U.S. evacuation that killed thirteen U.S. servicemembers.

While Bachelet singled out ISIS-K for criticism, she also accused the Taliban-led government of curtailing women’s rights and refusing to allow their “full participation” in public life. She noted that several women’s rights activists had disappeared since the onset of the group’s rule, which she implied the Taliban had been responsible for as part of a broader “erosion” of political rights and civil liberties within the country.