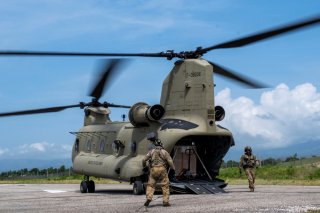 The future of helicopter warfare in the lower tier of combat will be informed by a remarkable alliance between the United States and the United Kingdom, two long-time allies with a shared history of military collaboration and joint operations.

“Collaboration with our Allies—be it bilaterally or multilaterally—helps ensure interoperability and provides insights that help us all achieve our capability objectives,” said Maj. Gen. Walter Rugen, Director of Army Futures Command’s Future Vertical Lift Cross-Functional Team. Rugen added that “based on our shared history, it is very fitting and no surprise that our first project arrangement is with the United Kingdom.”

There is certainly precedent for Rugen’s comment regarding collaboration and joint training between the United States and the United Kingdom. Of course, British forces supported the U.S.-led coalition during Operation Iraqi Freedom. More recently, the U.S. Marine Corps flew F-35B fighters from the deck of the United Kingdom’s HMS Queen Elizabeth aircraft carrier.

Maj. Gen. James Bowder, director of the British Army’s Futures program, noted that “as you would expect, the British Army has an extremely close and productive relationship with the U.S. Army.”

When it comes to helicopters and lower-tier aircraft like those being developed by the Army’s Future Vertical Lift program, U.S.-UK developmental connectivity will likely translate into increased networking, target sharing, and multi-domain operations. Shared developmental initiatives can help ensure that British aircraft are able to share targeting information with U.S. aircraft in real-time. This capability would allow British pilots to hand off target details, transmit time-sensitive intelligence data, and conduct joint attacks.

These capabilities will also help both forces deliver infantry to a point of attack under hostile fire, attack enemy assets from angles and positions that cannot be targeted from the ground, and perform critical medevac missions. With these needs in mind, two aircraft being developed through the U.S. Army’s Future Vertical Lift program—the V-280 Valor Tiltrotor and the Defiant X—have demonstrated major advancements in speed, sensor capabilities, and fuel efficiency.

Future efforts to mass combat power could be carried out across a wider area of operations if American attack helicopters are joined by their British counterparts.