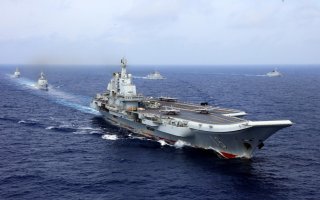 The Global Times, a Chinese government-backed newspaper, says that the Shandong is undergoing “maintenance and refurbishment,” suggesting that the carrier will be more combat capable following the procedures. The Global Times reports that some of the carrier’s sub-systems, including its arresting gear, power systems, pipelines, and electronics, have been subject to wear and tear.

However, an interesting, less emphasized aspect of this maintenance program is the plan to refresh the non-skid coating on the ship’s flight deck. Significantly, the U.S. Navy has in recent years added non-skid coating to the decks of its America-class amphibious assault ships in order to support F-35B vertical landings. This material reinforces the desk, allowing it to better withstand the heat caused by a vertical landing. In addition to applying the non-skid coating, the Navy reinforced the structures below the flight deck.

Non-skid technology could help with most kinds of fighter jet landings, but this development raises the question as to whether China is working on developing a copycat of the F-35B vertical take-off and landing (VTOL) fighter. China is known to be building the carrier-launched J-31 stealth aircraft, but it is not known to have any fifth-generation VTOL aircraft. This could put the Chinese Navy at a distinct disadvantage when it comes to projecting fifth-generation airpower in maritime warfare environments. VTOL technology would enable fifth-generation aircraft to operate from ships with less deck space and expand China’s target envelope for maritime attacks.

Attempting to copy a U.S. platform would not be out of character for the Chinese military, as the Pentagon has long reported curious similarities between some of the visible configurations and technologies in the F-35 and the Chinese J-20 and J-31 aircraft. Many public reports and Congressional papers have raised major concerns about Chinese cyber espionage.

Outside of any potential copying of U.S. strategies and technologies, any enhancements to China’s aircraft carriers will be of great significance to the United States’ interests and deterrence posture in the Indo-Pacific. For example, not long after the U.S. Navy conducted dual-carrier attack preparation exercises in the Pacific, China used two carriers to perform the exact same exercises. China’s growing and modernizing carrier fleet presents a substantial threat to the United States, Taiwan, Japan, and other Indo-Pacific partners and allies, as it will allow China to conduct massive air-attack operations across the region.