The U.S. Air Force Is Building a Virtual B-1 Bomber 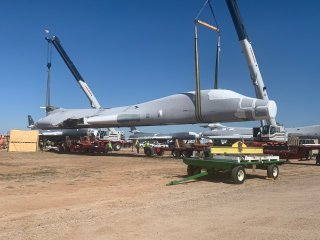 The U.S. Air Force is building a virtual B-1 bomber. The service hopes that a digital model of the hardworking, swing-wing warplane can help it to maintain the scores of B-1s it plans to keep in service into the 2030s.

The Air Force Life-Cycle Management Center Division at Wright-Patterson Air Force Base on April 23, 2020 announced it was working with Wichita State University’s National Institute of Aviation Research to disassemble, scan and rebuild in a virtual environment a 35-year-old B-1.

The resulting 3D model could help Air Force and Wichita State researchers “to study the effects of flight operations on aircraft structures.”

“Through the scanning process, we will discover all the places that saw structural failure or damage,” Air Force lieutenant colonel Joseph Lay, the B-1 program manager, said in a statement. “It will create a living medical record for the B-1,” Lay said.

“Then we will be able to apply data from aircraft in the field to help us predict areas that are more likely to have structural issues,” Lay said. “This living virtual model of the B-1’s structure will be superimposed with layers of maintenance data, test/inspection results and analysis tools, which can be integrated over the aircraft’s life cycle.”

The Air Force selected the B-1 with the serial number 85-0092 for the dubious honor of being taken apart down to the nuts and bolts. The B-1 is one of more than 30 B-1s in storage with the 309th Aerospace Maintenance and Regeneration Group at Davis-Monthan Air Force Base in Arizona.

85-0092 last flew with the 128th Bomb Squadron at Robins Air Force Base in Georgia. The Air Force in 2002 shuttered the squadron and stored its B-1s. “It will fly again in a digital format,” Lay said in a statement.

B-1s for many years flew from bases in the Middle East for long-endurance close-air-support missions over Iraq and Afghanistan. The relentless sortie-rate took a toll on the bombers’ structures.

In July 2019 just seven B-1s were fully mission-capable, South Dakota senator Mike Rounds revealed. Fifteen of the swing-wing B-1s at the time were in depots for maintenance. Thirty-nine aircraft were down for inspections, Rounds said during a Senate Armed Services Committee hearing.

The Air Force in its 2021 budget proposal asked Congress to let it retire the 17 worst-off B-1s. The service committed to keeping intact both bomb wings flying the B-1, but the wings would split 45 bombers instead of 62.

Lawmakers have yet to take up the proposal.

Air Force Global Strike Command chief Gen. Timothy Ray also has touted plans to arm around 18 of the 45 B-1s he wants to keep with a new hypersonic missile. Traveling faster than five times the speed of sound, the Air-Launched Rapid Response Weapon could help B-1 crews strike heavily-defended targets.

“As with many aircraft in the Air Force, tail number 85-0092 flew well beyond its original planned service life in terms of flight hours,” the Air Force stated. “That is what makes the aircraft a good candidate to study.”

“Now after the month-long process to remove the wings, horizontal and vertical stabilizers, the 29-feet-wide by 130-feet-long aircraft is being loaded on flatbeds for the 1,000-mile drive from Arizona to Wichita, Kansas.”