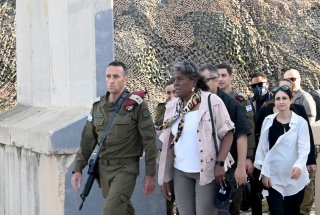 U.S. Ambassador to the United Nations Linda Thomas-Greenfield traveled to Israel in mid-November and was provided a tour of Israel’s challenges from the southern border with Gaza to the northern border where Israel faces Iranian-backed proxies. Most of the trip took place on November 16, 2021, with the ambassador conducting meetings over the next few days. It was a rare and important chance for Israeli officials to host the American envoy and also to showcase the challenges the Israel Defense Forces (IDF) is now facing. She was a guest of Israel’s Ministry of Foreign Affairs and received a unique tour from the Israel Defense Forces.

An IDF official discussed the unique trip and the areas that Thomas-Greenfield saw during the visit. “We had a theme of main things we want to share with the Ambassador. First of all, it was understanding who we are and the shared values the IDF has with the US military and the United States and the relationship [that is] based on what we believe in and what we are defending,” the official said. The visit included meetings with commanders and officers. “We wanted her to see who the people are and what we stand for.”

Israel faces numerous security challenges. These include both terrorist threats in the West Bank and Gaza, as well as the more complex threat of Iranian weapons and technology that flow to Syria and to Hezbollah in Lebanon. Israel recently fought a war with Hamas in Gaza in May. The ten-day war tested Israel’s defenses as the Iron Dome air defense system confronted some four thousand rockets. In addition, a drone was launched from Iraq by Iranian-backed forces and entered Israel’s airspace. It was shot down. However, the rising drone threats in the region have increased over the last months. Israel, the United States, and United Kingdom have accused Iran of using a drone to attack a commercial oil tanker in July. Drones attacked the U.S. garrison at Al-Tanf recently. A drone was used against the residence of the Iraqi prime minister as well.

The Israeli official, who could not be named due to the sensitivity of the tour, said that it was important to show the American ambassador the issues facing Israeli civilians who live near Gaza. These include some seventy-thousand people. The official said it was important for Israel to communicate “how we see the threat and how real it is, it’s really here; similarly on the Lebanese border where you have tens of communities living within kilometers from the border and how the threat is imminent.”

Israel also sought to convey the urgency of the Iranian threat in the region. While the United States continues to negotiate with the Iranians in Vienna and there is talk of a new Iran Deal, Israel is concerned about Iran as a destabilizing for in the region. The nuclear program is only one aspect of this. Iran is also “misusing any failed state in the Middle East to promote their agenda,” the source said.

Israel is concerned about Iran building up its forces with any of its proxies in places like Syria and Lebanon or in Gaza. The U.S. Ambassador went to the Israeli base at Palmachim and met with IDF Deputy Chief of Staff Herzl Halevi, who took over his position in July. She saw Israel’s multi-layered integrated air defense systems, including Arrow, Iron Dome, and David’s Sling. All these systems are not supported by the United States and Israel has developed Arrow and David’s Sling in cooperation with the United States. The United States has also acquired two batteries of Iron Dome and is testing one of them in Guam. Iron Dome was developed by Rafael Advanced Defense Systems and is now also being built in partnership with Raytheon in the United States. “The production of the systems is done in Israel and the US and we are proud of that collaboration,” Israel says.

The U.S. Ambassador also saw the border crossing to Gaza called Karen Shalom near the border with Egypt. While Israel says it is trying to enable humanitarian and other supplies to enter the Gaza Strip, where some two million people live in poverty, Hamas often diverts civilian aid to terror purposes, Israel says. After the recent conflict, a new system of payments from Qatar is supposed to streamline a process that would circumvent Hamas control over the cash that comes into the Strip. Israel said in the last war it used precision weapons to strike at a Hamas underground system known as the “Metro” where rockets are moved and positioned.

In the presentation to Thomas-Greenfield, the Israelis noted that items such as pipes sent to Gaza for drinking water have been converted into rockets in the past. “There is no issue allowing that to pass but Hamas has shown that they take pipes used for water or sewage and they have said that themselves,” the official said. “We don’t see problem building houses in Gaza and having as much cement as possible, but the cement is used for hundreds of kilometers of terrorist tunnels.”

The Israelis and the Ambassador then flew north by helicopter and viewed Israel’s challenges in the West Bank. Israel sought to convey the danger Israel sees in leaving parts of the West Bank to Palestinian security control, lest those areas one day fall to Hamas control and be used to shoot rockets at Israel. The fact the West Bank border is only a dozen miles from Israel’s coast means the threat of rocket and mortar fire is an increasing problem, especially as Israel’s population rapidly expands. The Palestinian Authority and its Security Forces, which have been backed by U.S.-supported training in the past, face hurdles in the future because the Palestinian leadership is aging. Hamas gained power in Gaza after Israel left the Gaza Strip in 2005. There are questions about who might take over power in the West Bank when the Palestinian Authority (PA) president Mahmoud Abbas leaves power. The PA has been cracking down on dissidents, but Hamas inroads could one day lead to a contest for power. In the Second Intifada Israel suffered high civilian casualties and fears a recurrence if it lets down its guard in the West Bank.

Thomas-Greenfield then went to the Lebanese border where she was shown the threats from Hezbollah. Israel says that UN Resolution 1701, which helped end the 2006 war between Israel and Hezbollah, has been violated by Hezbollah. It is stockpiling rockets, some 150,000 of them, and is bringing in Iranian Precision Guided Munitions. Israel wants UNIFIL, the UN body in Lebanon, to fulfill its mandate. But Hezbollah prevents the UN from doing so, Israel says. Israel also says, according to the official, that there are reports of Hezbollah harassment of UN members in Lebanon.

The U.S. envoy met with Israel’s Minister of Defense and also with UNIFIL. Meanwhile, on Israel’s southern border there is good cooperation currently with Egypt. This is because Egypt has faced years of an ISIS-backed insurgency that has led to high casualties. Israel and Egypt have grown closer over the last few years. There is also a Multi-National Force and Observers in Sinai. In recent days reports said Israel had agreed to enable Egypt to increase its forces in Sinai. The number of Egyptian forces and equipment come under the 1979 Egypt-Israel peace treaty guidelines. The warming ties enable Egypt to better secure Sinai from terror threats. The recent public meeting between Israeli officers and their Egyptian counterparts is a sign of this improved relationship. Israel has had a new government over the last six months after Benjamin Netanyahu was pushed out of power in May. This has generally led to warmer ties with Jordan and more open ties with Egypt. The Gulf and Israel also have new ties based on the Abraham Accords that were signed last year. Israel’s air force commander went to the UAE on the eve of the Dubai Air Show and the UAE air force commander was in Israel for the Blue Flag drill in October. In addition, Israel and the UAE, and Bahrain took part in a U.S. Central Command naval drill in the Red Sea.

Israel has also seen increased drone threats in the region. “That includes drones that are becoming more and more that is becoming an issue for the whole world, Iran is proliferating this drone tool that is accurate and have a capability that can be launched and attacking and killing civilians in the Mercer Street ship [in July] and trying to kill and assassinate the Prime Minister of Iraq. They are proliferating this tool that they wish to use as a destabilizer,” the official said.

The fact that an Iranian drone was flown from Iraq in May has been confirmed by Israel. This is important because it illustrates how Iran is increasingly moving drone technology to groups throughout the region, from the Houthis in Yemen, to Iraq, Syria, and Hezbollah in Lebanon. Iran has based drones at T-4 base in Syria and has used them against U.S. forces this year in Syria and Iraq. “The threats of drones is proliferating to all the area. Look at what the American bases have suffered, the threat is not limited,” the official says.