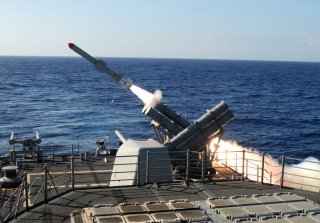 The British Royal Navy, in tandem with the U.S. Navy, sank a decommissioned ship in the North Atlantic in a live-fire training exercise—one that saw an array of weaponry unleashed on the vessel.

In a statement, the Royal Navy highlighted what platforms it used to sink the retired U.S. Navy ship.

“The exercise, named Atlantic Thunder, was the first of its type for the Royal Navy in 18 years and took place alongside U.S. Navy and U.S. Air Force counterparts.”

Atlantic Thunder was a real-world test of “complex weapons” at range and allowed both the Royal and U.S. navies the opportunity to test their individual weapon systems.

The Royal Navy’s Type 23 frigate HMS Westminster shot a pair of Harpoon anti-ship missiles at the ship in tandem with an American P-9 Poseidon airplane, which fired a single Harpoon missile. The three munitions struck the ship simultaneously.

A Wildcat helicopter also launched Martlet surface-to-air missiles, a new lightweight munition that the United Kingdom has also donated to Ukrainian forces. Aside from possible combat use in Ukraine, the event marked the first time the Martlet missile had struck a “realistic target at sea.”

The statement also explained that a Wildcat helicopter used a laser-targeting pod to guide a Paveway IV precision-guided munition launched from a Typhoon fighter jet, marking the “first time an RAF Typhoon had dropped live ordnance onto a warship used as a maritime target, and the first time a Royal Navy helicopter had guided the Paveway IV on to its bullseye.”

The exercise comes at a time of heightened tensions in Europe, as the conflagration of war continues in Ukraine. Moreover, in light of Russia’s expansionist and revanchist intentions, the joint exercise is a high-profile opportunity for both countries to flex their military muscle.

“Soon after Atlantic Thunder, the target came to rest on the bottom of the ocean, where it will remain under the ownership of the US Government in perpetuity,” the Royal Navy statement explained.

It added that “extensive preparations took place over many months beforehand to ensure the exercise was conducted in a safe and environmentally compliant manner, including the removal of toxic materials and pollutants from the US ship before she could be used as a target in this way.”

“Oliver Hazard Perry-class frigate USS Boone served in the US Navy between 1982 and 2012. She is named after Vice Admiral Joel Thompson Boone, a Medal of Honour recipient and the most-highly-decorated medical officer of World War I.”