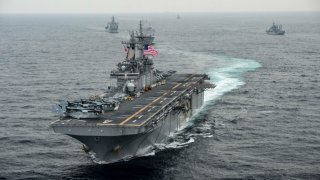 “The U.S. routinely conducts CSG operations in the waters around the Republic of Korea to exercise maritime maneuvers, strengthen the ROK-U.S. alliance, and improve regional security,” a statement issued by the United States Navy’s Seventh Fleet explained.

“The Republic of Korea and U.S. share one of the strongest alliances in the world and we grow stronger as an alliance because of our routine exercises here in South Korea and the close relationship and ties that we forge from operating at sea together.”

Though the United States and South Korea are conducting joint exercises, they’re not the only two navies working together in the region.

On Monday, the U.S. Coast Guard reported that three Chinese vessels and four Russian warships near Alaskan islands in the Bering Strait were observed while a Coast Guard ship was out on routine patrol.

The ships were all “in a single formation with the Renhai [a PRC Guided Missile Cruiser] as a combined surface action group operating in the U.S. Exclusive Economic Zone (EEZ).” Though the small surface group dispersed, the Coast Guard explained that it would monitor the area to ensure no disruptions to the U.S. exclusive economic zone.