U.S. Army Gears Up to Fight With the Navy and Marine Corps 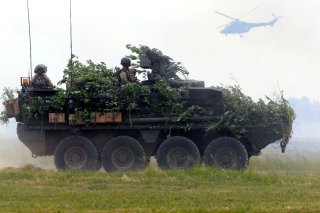 The U.S. Army is looking to improve its interoperability with the U.S. Navy, Marine Corps, and allies and partners throughout the Indo-Pacific region as competition with China.

Compared to China, the United States possesses one extremely handy tool: friends and partners that also share a desire for a free and open Pacific, one not dominated by Beijing.

Lt. Gen. James Jarrard, the deputy commanding general of USARPAC, explained to UNI News that “continuing to develop those relationships is a key part of integrated deterrence at both the strategic and the operational level.”

Army-to-army training, while valuable, plays second fiddle to exercise with other service branches.

“We find if we’re just training army to army with another army, that is good—it’s good towards developing that kind of combined interoperability—but the reality is unless you’re doing it joint, unless you’re doing it multinational, you’re just not going to be successful,” Brig. Gen. Jeffrey VanAntwerp, the Deputy Commanding General of Operations, 25th Infantry Division, said to USNI News.

“And so our interest is in taking a lot of these exercises, and if our partners are interested and we want to work together and grow those exercises to ones where we’re working in a multinational way and in a joint way, that’s absolutely where we’d like to go,” he added.

Familiarity with the environment is a big part of training.

“The national training center in Fort Irwin, California, it was a big desert. And that’s useful if you’re going and deploying to the Middle East, not so much if you’re out here in the Pacific. We have the jungle environment and the island archipelago environment that we have here in the Pacific, here in Hawaii. But up in Alaska we also have the cold high mountains that we have in other parts of the Pacific,” said Jarrard.

With the flames of war still alight in Ukraine, eyes are now on China, given Beijing’s increasingly belligerent rhetoric towards Taiwan and reunification with the small island democracy, and the strong indications that the post-World War Two rules-based international order has come to an end.

Though the U.S. Marine Corps and the U.S. Navy have typically seen the Indo-Pacific region as their domain, the Army increasingly considers the region an area it should be prepared to enter.

Though China’s military might is on the rise—the country already boasts the largest navy in terms of hull numbers—it lacks friends or allies in the region and is negatively perceived by many of its neighbors.