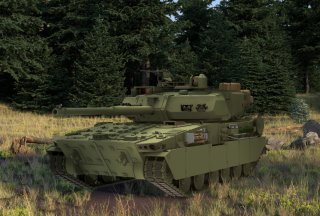 A faster, lighter, and highly lethal armored light tank able to be deployed by air and keep pace with fast-moving dismounted infantry is precisely the kind of vehicle that will be needed in future wars. Future conflicts are expected to be faster, more dispersed, and heavily reliant upon artificial intelligence (AI)-enabled information flows. The window of opportunity to locate, target, and “close” with an enemy will continue to shrink. Thus, there is a need for an armored vehicle capable of providing close fire support for attacking forces.

“The rapid pace that the MPF will bring to our light formations will change the pace and expand the battlefield for those commanders giving them time and space to make decisions, much faster,” Maj. Gen. Ross Coffman, director of Army Futures Command's Next Generation Combat Vehicle Cross Functional Team, told the National Interest at a press event.

High-speed, AI-enabled armored vehicles are needed to keep pace with the breakthroughs in information flow now being achieved by the U.S. Army. Project Convergence, for example, has shown that the U.S. Army can share real-time, organized, relevant, and sensitive combat information across the force faster and more efficiently. The breakthroughs are paradigm-changing, and inspiring new concepts of operation for operational futurists refining concepts such as combined arms maneuver. Faster information sharing shortens sensor to shooter time from minutes to seconds. Unmanned systems, helicopters, and even armored ground vehicles can gather incoming sensor information, bounce it off an AI-enabled computer, and perform rapid data analysis to identify the optimal weapon with which to attack an enemy. This concept, known as warfare at the speed of relevance, has been driving weapons development toward new platforms such as the Mobile Protected Firepower vehicle.

In a statement last month, the U.S. Army announced it awarded a Mobile Protected Firepower production contract to General Dynamics Land Systems (GDLS), which also produces the Abrams battle tank. Developers say that while fire-control, armor, and some electronics expertise from the upgraded Abrams were used to engineer the MPF, the vehicle is built with new innovative technologies, and designed for high-speed protected warfare missions.

The U.S. Army's top acquisition executive credited weapons experts, combat requirements developers, and collaboration with lawmakers for the successful emergence of the new combat vehicle. “The acquisition and requirements community worked together to move this system into production in 4 years. We did acquisition quickly due to flexible legislation to allow prototype delivery,” Douglas Bush, assistant secretary of the Army for acquisition, logistics, and Technology, told reporters following the announcement.

The MPF developmental timeline represents the kind of accelerated acquisition emphasis put into effect recently by Bush and other senior weapons developers, an approach that uses digital engineering, software upgrades, rapid prototyping, and soldier-developer collaboration to refine requirements for the tactics, strategies, and operational approaches needed for a new paradigm for combined arms maneuver. This also includes a deliberate blend of armor protection, mobility, speed, and AI-enabled computing and command and control.

Maj. Gen. Ross Coffman, director of the Next Generation Combat Vehicles Cross Functional Team, told the National Interest during a press event that the program has succeeded thanks to a collective effort to understand “tiered” requirements gathered from soldier feedback. He explained that while additional systems and capabilities, such as laser weapons, manned-unmanned teaming, active protection systems, and even low-altitude counter-air defense weapons are all within the realm of the possible, the initial focus of U.S. Army developers was to start with achievable requirements that had “built in” room for growth.

“The Army in the past has had trouble continuing to expand requirements and then it eats up more time and money. We want the MPF to remove impediments on the battlefield in a protected program. This is a rapid program because we did not overstep on requirements and we set a schedule that was achievable,” Coffman said.

Continued modernization of the light tank will be dependent on technologies such as algorithms for autonomy, networking, and AI-enabled computing. The original U.S. Army and GDLS design effort sought to engineer an open architecture system with interoperable technical standards. The goal was to construct a capable vehicle with the ability to accommodate new technologies over time. Perhaps the MPF will launch drones, wield lasers, control robotic vehicles, share data with ships and fighter jets, and even maintain a drone-helicopter counterattack defense weapon.

“Our design reflects the purpose of the vehicle, which will provide the infantry brigade with large caliber very precise mobile fire power. How the Army uses it is going to be different, as it is designed to support infantry brigades. It is a capability the infantry brigades have lacked for some time,” Tim Reese, director of business development at GDLs, told the National Interest in an interview.

All of these variables have been woven into an accelerated acquisition and development process intended to reduce bureaucracy, streamline modernization, and build reliable, functional, and perpetually upgradable new vehicles. The service will start with ninety-six vehicles and grow from there.

“We are on our cost schedule and performance targets. The award will be a contract covering ninety-six vehicles. [The] initial lot will be twenty-six vehicles. When they arrive, we will confirm performance reliability testing and full up system live fire testing and operational testing. We will confirm with the Army if they are ready to move this to a First Unit Equipped in 2025,” Brig. Gen. Glen Dean, program executive officer of Ground Combat Systems, told the National Interest.

Reese explained that GDLS has engineered the vehicle for a high horsepower-to-weight ratio enabled by an advanced suspension system. The diesel engine is mounted in the front of the tank, as opposed to the Abrams which has its engine in the rear. While the GDLS vehicle is engineered with a 105mm cannon, it can also exchange it for a heavier cannon as needed.

“We built in some growth margin so if later on the Army wants to add something, such as operate an unmanned ground vehicle, we can accommodate that. We tried to make it as open and expandable. We built a lot of design margin into our vehicle from computing power to electrical power,” Reese said.

For example, early “modularity” during the vehicle’s initial engineering phases enables it to swap canons to add more firepower for certain missions. “We have designed the turret to accommodate more than one large caliber cannon,” Reese said.

Given the increasing need for onboard electrical power, the GDLS MPF is built with a newly designed slip ring to accommodate additional data capacity between the hull and the turret. “The turret spins around into a hull, not a fixed point where wires are. The slip ring is a mechanical device that allows you to transfer data and operate under all conditions,” Reese said.