U.S. Embassy in Kyiv to Be Evacuated as Threat of Invasion Looms 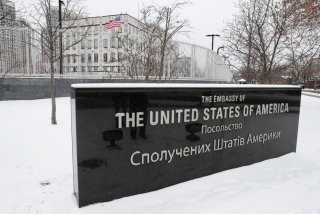 On Friday, U.S. officials indicated that Washington intends to evacuate the U.S. Embassy in Kyiv. The evacuation comes just days after the United States warned that a Russian invasion was potentially imminent.

After the evacuation was revealed on Friday, the State Department officially confirmed it on Saturday, claiming that the embassy would suspend consular services and that all non-emergency staff would be asked to leave the country. State Department officials noted that some diplomats would be reassigned to a consular post in Ukraine’s western city of Lviv, which is on the country’s border with Poland and well away from an immediate Russian threat.

The embassy’s evacuation marks a dire new point in the deepening crisis, which has seen more than 130,000 Russian troops deployed to the country’s western border with Ukraine. While family members of diplomats were returned to the United States, and non-essential personnel were encouraged to leave in recent weeks, the embassy remained open and continued to conduct consular services.

The drawdown follows National Security Advisor Jake Sullivan’s warning that all Americans should leave Ukraine as quickly as possible. On Thursday, Ukraine was assigned a “Level 4: Do Not Travel” designation by the State Department because of the risk of a Russian invasion, and President Joe Biden publicly urged Americans currently in Ukraine to depart immediately.

While Russia has insisted that it does not intend to invade Ukraine, it has requested a series of concessions from the West. These demands include a permanent guarantee that Ukraine will be refused admission to the NATO military alliance and restrictions on troop deployments and training activities in Eastern Europe. U.S. and NATO officials have refused these demands, and diplomacy between the two sides has so far failed to substantially lower tensions.

The Pentagon also announced on Friday that it would deploy an additional 3,000 troops to Poland, bringing the total number of U.S. troops in Poland to 4,700. The soldiers to be deployed are currently stationed in Fort Bragg, North Carolina; officials indicated that they would most likely be in Poland by early this week. U.S. troops in Eastern Europe have been tasked with training alongside national forces.

In all, around 80,000 U.S. troops are deployed to Europe, although many are stationed in Germany and other areas far from the Russo-Ukrainian border. The White House has ruled out troop deployments to Ukraine, which is not a member of NATO.