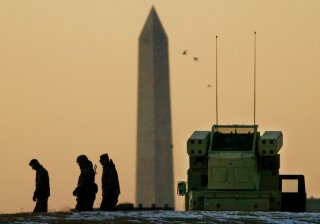 A recent Marine Corps exercise indicates that should the Marine Corps need to fend off enemy assaults in the Pacific, they have the assets to do it.

The future of the Marine Corps Will be aquatic, though it might not necessarily be on large navy ships. Instead, the marines may opt for a strategy that favors groups of Marines and sailors puttering around on small, inflatable rubber rafts—wielding a potent array of weapons.

During a recent military exercise that took place in and around the island of Okinawa called Hagåtña Fury 21, the Marine Corps practiced airmobile assault as well as transitioning from ship to shore, using the kinds of rafts that Reconnaissance Marines famously use as part of their training, and in some cases to get from ship to shore. One of the more unique aspects of the exercise saw Marines armed with Stinger short-range air defense missiles.

The Stinger missile system entered service with the United States in the early 1980s and is not by any means new. However, employing the Stinger missile system on austere Pacific islands—mere specks of land in the world’s largest ocean—for air defense is. The heat-seeking missile provides formidable air protection against targets at lower altitudes, up to 3,800 meters.

Though the Marines are arguably the world’s premier amphibious assault force—with decidedly offensive capabilities—the recent Hagåtña Fury 21 exercise that showcased the Stinger defensive missile system provides a window into the Marines’ strategic planning for the near future. “The exercise demonstrated that Marines are capable of seizing, defending, and providing expeditionary sustainment for key maritime terrain in support of the III Marine Expeditionary Force,” a Marine statement about the exercise reads. The keyword from this statement? Defending. Not only will the Corps seize enemy-held islands, they’ll keep a hold of them too.

As the Marine Corps transitions from grinding land campaigns in the Middle East against lightly armed non-state actors to preparing to face a near-peer rival in the Pacific, their role as what had been essentially another Army is rapidly coming to an end. Not only has the Marine Corps divested all their tank battalions, but they’ve also gotten rid of a number of artillery and heavy mortar units as well. Not only that, but the Corps is also experimenting with radical new force designs that would see groups of highly trained, highly capable groups of Marines essentially acting on their own, flitting from island to island in the Pacific. In stark contrast to the types of mission the Marines Corps conducted in Afghanistan and Iraq, these Marines would harass enemy surface ships, and even going on the hunt underwater tracking down and destroying enemy submarines.

Furthermore, the Corps is embracing not only new techniques but new technologies with which to close with and destroy the enemy. Autonomous systems like remote-controlled JLTVs armed with powerful anti-ship missiles could operate independently of Marine grunts on the ground. Reconnaissance and surveillance is increasingly being pushed downward: Marines are launching and controlling small drones to increase their situational awareness at the squad level.

Ultimately the Marine Corps is undergoing an incredible amount of change, and by reclaiming their aquatic heritage, they are asserting in no uncertain terms: All islands in the Pacific are vulnerable and once we take them, we mean to hold them.