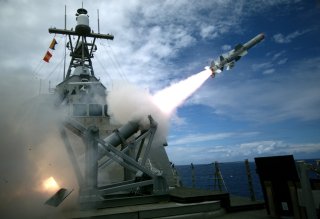 The United States just concluded its ninth iteration of the biennial Valiant Shield exercise, a twelve-day event coordinating operations in the air, on land, at sea, and in the cyber domain focused on detecting, locating, tracking, and engaging a hypothetical adversary. The event includes units from across the Department of Defense and practices joint live-fire exercises across several branches.

The culminating event for Valiant Shield was sinking a decommissioned ship during live-fire bombing runs and targeting by other U.S. Navy and U.S. Marine Corps ships and aircraft. Interestingly, the U.S. Navy struck the target ship with an SM-6 missile.

“The capstone event to close out Valiant Shield was the sinking exercise (SINKEX) on the decommissioned frigate USS Vandegrift (FFG 48). USS Benfold launched a Standard Missile (SM) 6 to start the coordinated multi-domain, multi-axis, long-range maritime strikes,” the U.S. Navy explained in a statement.

Though told rather blandly, the statement speaks to the SM-6 missile’s increasing flexibility. The missiles were initially designed to give the U.S. Navy an extended-range high-speed anti-air asset, targeting jets, helicopters, anti-ship cruise missiles, and limited terminal ballistic missile defense. However, as a potent anti-ship missile, firing the SM-6 against surface vessels broadens the scope of SM-6 targets at sea.

“Watch standers from DESRON 15 led the event from a combat information center aboard Ronald Reagan. This event featured a sequence of live-fire events, demonstrating the joint forces' capability to deliver fires and effects in the maritime environment. New weapons were tested, along with communications technologies, to integrate cyber effects to conduct long-range, precise, lethal, and overwhelming multi-domain strikes against a surface target at sea,” the statement noted.

Another U.S. Navy statement explained that the strike by the SM-6 missile “was a significant impact in the sinking of the Vandegrift [target ship],” but that it was also not the only hit that the ship sustained.

The anti-ship capability has been introduced to the SM-6 missile via targeting software upgrades. Though the U.S. Navy — and indeed many other navies around the world — have leaned heavily on the Harpoon missile for anti-ship fires, the SM-6’s range is roughly double the Harpoons.

Though the SM-6 warhead remains optimized for anti-air threats and is smaller than the Harpoon’s, the missile could benefit from its high Mach 3-speeds which could add a great deal of kinetic energy to the missile’s explosion.

The U.S. Navy explained that “the planning for Valiant Shield 2024 has already begun,” and that they are “incorporating the lessons learned over the past two weeks so the Indo-Pacific joint forces can continue to ensure a Free and Open Indo-Pacific.”