The Future of the United State Marine Corps is in Guam 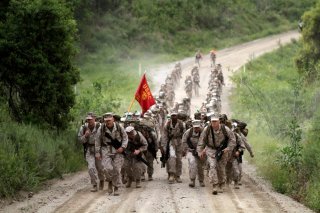 Here's what you need to remember: In a hypothetical Pacific conflict, Guam could command a powerful position as one of the United States’ more centrally-located positions in the Western Pacific—and perhaps one of the Marine Corps’ more important bases in the future. Guam is likely to factor heavily into the Corps’ future Pacific presence.

The United States Marine Corps officially opened a new USMC base and their first new base since 1952. The base, called Camp Blaz, is located on the island of Guam. Over the next five years, approximately 5,000 Marines from III Marine Expeditionary Force in Okinawa will shift from Japan to Guam, though only 1,300 Marines will be permanently stationed there, with the other 3,700 Marines part of a rotational force.

Another factor worth considering is the rapid advancements being made in aviation. The Marine Corps current tiltrotor aircraft, the V-22 Osprey would struggle to land anywhere in Asia besides a few remote Pacific islands—but from Guam, at least one of the company’s prototypes, the V-247, could make it all the way to central China, not to mention the entire South China Sea.