The Marines Will Soon Be Sinking Submarines 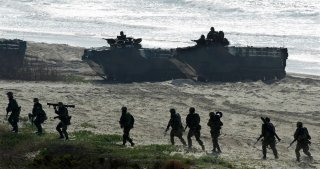 Here’s What You Need to Remember: The disruptive potential of Russian submarine assets in the Atlantic cannot be overstated.

In Proceedings, a monthly magazine published by the United States Naval Institute, General David Berger, the Commandant of the Marine Corps outlined what could end up being a new mission for the Corps: anti-submarine warfare (ASW).

Berger cites the expanding Chinese and Russian capabilities underwater as justification for a Marine ASW capability. He argues that the Corps is especially well-positioned to take on underwater assets thanks to their Expeditionary Advanced Base Operations (EABs). More specifically, Gen. Berger explained that ASW is a “campaign of sustained actions over time for undersea advantage,” and that Marine EAB assets, particularly in Europe would provide a “significant contribution to undersea warfare campaigns, including holding Chinese and Russian submarines at risk.”

In particular, Washington is worried about Russian revanchism since the end of the Cold War. Of particular concern is how Moscow’s increasingly capable Russian submarine force is catching up to the U.S. Navy’s previously unparalleled underwater advantage—an advantage that America wants to preserve.

Quoting Vice Admiral James G. Foggo, Commander Sixth Fleet, Gen. Berger described the underwater competition currently underway. “It is now clear that a fourth battle [of the Atlantic] is not looming, but is being waged now, across and underneath the oceans and seas that border Europe. This is not a kinetic fight. It is a struggle between Russian forces that probe for weakness, and U.S. and NATO ASW forces that protect and deter. Just like in the Cold War, the stakes are high.”

If the Navy’s current ASW capabilities were to be disrupted, Russian submarines could more easily transition from the Barents Sea in Russia’s northwest near Finland to the North Atlantic via the Greenland, Iceland, and the United Kingdom gap (GIUK gap). The GIUK gap is a geographic chokepoint that Russia submarines would have to slip through in order to reach the open Atlantic. And so that gap is patrolled by North Atlantic Treaty Organization (NATO) navies to prevent Russia from secreting sending a lot of its submarines through it.

The disruptive potential of Russian submarine assets in the Atlantic cannot be overstated. If given free rein in the Atlantic, an incredible number of targets in the United States and Europe could be threatened—and not just cities or other targets close to shore. If near enough to American or European shores, targets hundreds of miles from the coast could also fall victim to Russian submarine-launched cruise missiles.

To keep Russian submarines penned in, the Corps could build EABs in key areas. Norway and Iceland in particular would be prime locations for Marine EABs, as they would be relatively close to Russia, and could help augment existing Navy ASW assets. But what would a Marine Corps EAB do exactly?

The Marines Are Coming

In addition to dropping hardware like sonobuoys in anticipated high-traffic locations, Marines pilots could fire anti-submarine torpedoes from the air, or ASW missiles from EABs. Not limited to anti-submarine warfare, Marine EABs could also deploy long-range anti-ship missiles from land to push a Russian presence further out at sea.

There is also an opportunity for Marine Corps EABs in the Pacific. “The same concept could be applied to the First Island Chain in the western Pacific. Without being limited to the Philippines and Japan, EABs could create opportunities from multiple locations beyond the South and East China Seas,” Berger explained. “Close, confined seas may offer more opportunities for Marine EABs to sense and strike Chinese ships and submarines, while supporting fleet and joint ASW efforts.”

The Marine Corps has whole-heartedly embraced change in recent years. From divesting all their tank battalions, to getting a new amphibious troop carrier into service, to experimenting with remote-controlled, missile-lobbing trucks, change is rapidly coming to the USMC.

This article first appeared earlier this year and is being reprinted due to reader interest.