A U.S. Navy Aircraft Carrier Is Conducting Wargames with U.S. Allies (Thanks to China) 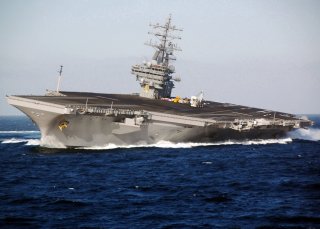 The U.S. Navy’s USS Ronald Reagan Carrier Strike Group has started a massive series of wargames and tactical exercises with the Australian Royal Navy and Japanese Maritime Self-Defense Forces in a visible effort to show resolve, demonstrate integrated warfighting ability and, quite simply, deter Chinese aggression in the area.

While the United States has been conducting a higher-than-usual op-tempo in the Pacific in recent weeks, including several dual-carrier attack training operations, this trilateral operation brings large significance to the area. Not only are Australia and Japan near China to the South and West, but being able to network with U.S. Naval assets brings several large tactical implications by massively improving the U.S. and allied deterrence posture in the area.

Of course, the success of the exercise will hinge upon how successful the navies can network to one another; should carriers, destroyers and air assets have an ability to share intel in real-time across air and sea domains, the three countries could break new ground when it comes to warfare operational efficiency. Allied interoperability is frequently cited as a goal or emphasis of these kinds of operations, yet at times it can be somewhat unclear as to what exactly that means, or the extent to which it is brought to fruition. This will depend upon radio frequencies, radar applications, sensing systems and technical standards for video data links such as Tactical Common Data Link or NATO’s Stanag 4586. Also, since all three countries also have F-35s, it goes without saying that common data links could easily help network the different Navies together in unprecedented ways.

All three participating countries are part of the Aegis radar consortium, which favors successful integration. The aim of this kind of synergy would be to enable dispersed or disaggregated surface ships to pass along target information across the horizon. For instance, should an incoming ballistic missile be following a certain trajectory, on ship-mounted Aegis radar could find and pass along target data to enable responding commanders to have more time. Drone boats could also massively expedite cross-country networking by operating as interconnected, forward operating nodes able to find mine or enemy targets at safer stand off ranges. Should the technical architecture be somewhat similar, as it is in the case of Aegis, combined operations could be successful.

Perhaps the U.S. Navy could seek to utilize its dual-carrier operational ability by extending joint-attack platform coordination with Japan and Australia. Such an integration, involving coordinated joint attacks is feasible to be sure, yet likely more challenging than U.S.-to-U.S. dual-carrier ops.

Finally, the ability for U.S., Japanese and Australian forces to essentially encircle the South China Sea brings a clear advantage, as it could help deter, thwart or disrupt Chinese operations in the event of a conflict. Another reason some kind of trilateral cooperation would be important to deter China can simply be found in the rapid and massive extent to which China is expanding its Naval power; China will soon double its amount of destroyers, more than double its number of aircraft carriers and usher in a new generation of attack submarines.