The U.S. Navy Is Gearing up for a Massive War Game to Deter Russia 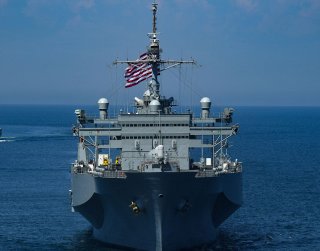 Russian and U.S. maritime assets appear to be watching one another even more closely as tensions mount in Ukraine; undersea reconnaissance technologies improve; Russian submarines expand their capabilities and America readies for a massive wargame in the Black Sea.

Of course, the annual exercise appears to be a decided and clear attempt to demonstrate allied resolve in a deterrence operation near Russian shores, yet this year’s assessments take on a newer urgency in light of Russia’s fast-growing Navy, increased Russian-U.S. tensions and reports that Russian submarines have been operating in the English Channel.

For instance, a Russian Kilo-class attack submarine was seen traveling on the surface with a tugboat on what a report in Forbes magazine called a routine maintenance mission.

“The Kilo Class attack submarine, which can be armed with Kalibr cruise missiles, has been tracked by open-source intelligence analysts since it left Syria,” the Forbes report states.

The sighting is also significant, the Forbes report describes, because the submarine is based in the Black Sea and indeed very far from its home port. It would not be at all surprising if Russia were increasing or accelerating its undersea surveillance missions for several key reasons.

Attack submarines are increasingly being used for more reconnaissance missions given technological breakthroughs in the areas of undersea sonar, quieting technologies and advanced maritime sensors. These developments enable submarines to perform intelligence gathering operations in closer proximity to enemy shorelines and approach areas otherwise difficult for surface ships to access.

U.S. Virginia-class attack submarines are engineered with a “Fly-by-Wire” capability, which allows the ship to quietly linger in shallow waters without having to surface or have each small move controlled by a human operator.

With “Fly-by-Wire” technology, a human operator will order depth and speed, allowing software to direct the movement of the planes and rudder to maintain course and depth, Navy program managers have told Warrior Maven. The ships can be driven primarily through software code and electronics, thus freeing up time and energy for an operator who does not need to manually control each small maneuver. Previous Los Angeles-Class submarines rely upon manual, hydraulic controls.

The technology, using upgradeable software and fast-growing AI applications, widens the mission envelope for the attack submarines by vastly expanding their intelligence, surveillance, and reconnaissance (ISR) potential. Using real-time analytics and an instant ability to draw upon and organize vast data-bases of information and sensor input, computer algorithms can now perform a range of procedural functions historically performed by humans. This can increase the speed of maneuverability and an attack submarine’s ability to quickly shift course, change speed or alter depth positioning when faced with attacks.

As the U.S. Navy’s 2018 “Commander’s Intent for the United States Submarine Force” states: “We are uniquely capable of, and often best employed in, stealthy, clandestine and independent operations… we exploit the advantages of undersea concealment which allow us to: conduct undetected operations such as strategic deterrent patrols…” Other capabilities U.S. submarines can do according to the document include “intelligence collection, Special Operations Forces support, non-provocative transits, and repositioning.”

Sea Breeze 2020 is scheduled through July 26 and involves more than 2000 personnel from nations such as Bulgaria, Georgia, Norway, Romania, Spain, Turkey, Ukraine, and the United States.