U.S. Navy Gears Up for the Race to Develop New Hypersonic Weapons 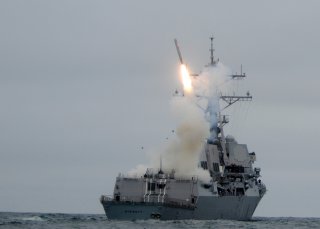 The U.S. Navy would ideally like to have a hypersonic anti-ship missile in service well before the end of this decade. In addition, America’s sailing service believes the weapon would be of great importance against peer adversaries—namely China and Russia.

The U.S. Navy explained in a tranche of documents that its new hypersonic missile, called the Hypersonic Air-Launched Offensive Anti-Surface Warfare (HALO) missile, should be in service by 2028.

"OASuW Inc 2/HALO will address advanced threats from engagement distances that allow the Navy to operate in, and control, contested battle space in littoral waters and Anti-Access/Area Denial (A2/AD) environments," one of the documents explained. "In order to counter the evolving near-peer threat capability, OASuW Inc 2/HALO is required to be fielded in FY 2028."

Ultimately the U.S. Navy would like to get the HALO program off the ground sometime next year; it appears to have allocated $92.5 million for that purpose. More specifically, the Navy will put that seed money toward “targeted investments in maturing subsystem technologies,” as well as “component or full-scale prototyping activities.”

Details inside the document on what precisely the missile will look like or what its capabilities will be are scant. However, the document explained that the Navy would like the HALO missile to have a data link between its firing platform.

This is a strong indication that the missile could be given new coordinates after launch. This ability would afford commanders using the HALO missile a high degree of flexibility.

The HALO missile would be the Navy’s newest hypersonic missile, though not the first one they’ve set out to develop.

The Navy’s Office of Naval Researched released a short-lived notice for contractors for a scramjet-powered cruise missile earlier last year. The Navy required the “Screaming Arrow” missile to be compatible with the Navy’s fleet of F/A-18 Super Hornet jets. The Navy mysteriously canceled the notice, though it subsequently reposted the notice in mid-2021.

In 2020, the Navy teamed up with the defense heavyweight Boeing to develop a ram-jet-powered missile. This missile would not be put into service but would instead be used to gather data for other future U.S. Navy hypersonics.

Though the U.S. Navy would certainly like to have the HALO missile in service by 2028, it is possible that it will actually have not one, but three hypersonics in service before 2030.