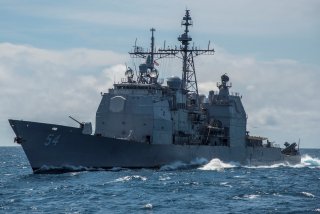 Earlier this week the U.S. Navy’s Ticonderoga-class guided-missile cruiser USS Antietam (CG 54) conducted a Tomahawk land-attack cruise missile (TLAM) strike drill, during which it targeted the Farallon de Medinilla range, which is located on an uninhabited two-hundred-acre island off the coast of Guam. The live-fire missile shoot was conducted as part of Valiant Shield 2020, a U.S. only, biennial field training exercise (FTX), which is focused on the integration of joint training in a blue-water environment among U.S. forces.

The exercise demonstrated the Antietam’s ability to track, target and engage threats to protect the peace and stability in the Indo-Pacific region.

“The United States military is committed to preserving security, maintaining regional stability, and remaining postured to respond to a wide variety of contingencies,” said Capt. Russell Caldwell, commanding officer USS Antietam. “The TLAM exercise, as part of the overall Valiant Shield 20 scenario, provides the entire Ronald Regan Strike Group the opportunity to exercise critical warfighting skills that helps the warfighter refine their tactical abilities to respond to a full range of military response options that are available in defense of our shared interests in the Asia Pacific region.”

The timing of the training is notable in that it occurred just a day after the Chinese People’s Liberation Army Air Force (PLAAF) released a video on its Weibo social media account that presented a simulated attack on Guam’s Andersen Air Force Base. However, it appears that some of the video may have been simply “recycled” from Hollywood blockbusters, including The Hurt Locker, The Rock and notably Transformers: Revenge of the Fallen.

The Ticonderoga-class USS Antietam was laid down by the Litton-Ingalls Shipbuilding Corporation at Pascagoula, Miss. in November 1984, launched in February 1986 and commissioned June 6, 1987, in Baltimore, Maryland. The Ticonderoga-class cruisers were based on the Spruance-class destroyers and introduced a new generation of guided-missile warships that could utilize the Aegis phased array radar that can simultaneously scan for treats, track targets and guide missiles to interception.

The Tomahawk long-range, all-weather, subsonic cruise missile is currently in service with U.S. Navy surface ships and submarines. It was originally developed by General Dynamics and is now manufactured by Raytheon. It can be fitted with a nuclear or conventional warhead. It has an operational range of up to twenty-five hundred kilometers.

This recent training—including the live missile shoot—enables real-world proficiency in sustaining joint forces through the detection, locating, tracking and engaging units at sea, in the air, on land and in cyberspace in response to a range of mission areas.

Valiant Shield consists of a series of military exercises that promote integration among the U.S. Army, Air Force, Navy and Marine Corps. Each of the successive exercises is meant to build on lessons learned from the previous training to enhance complementary capabilities and develop new tactics, techniques and procedures. The training further is designed to increase the deterrence and stabilize the effects of a joint force, which is ready to respond to any contingency.

In total, this year’s Valiant Shield will see about one hundred aircraft and an estimated eleven thousand personnel from the branches of the U.S. military engaged in training in a blue-water environment.