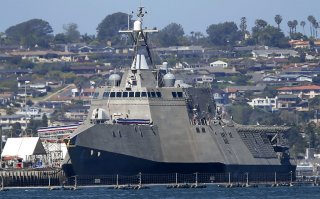 The U.S. Navy is looking to overcome years of setbacks in its Littoral Combat Ship (LCS) Program, which has cost more than $30 billion over the past two decades. During that time the Navy has managed to acquire just thirty-five of the three-thousand-ton-displacement vessels.

The LCS was designed as a fast, agile, mission-focused platform that could operate in near-shore environments, but also be capable of conducting open-ocean tasks and addressing twenty-first-century coastal threats including submarines, mines and swarming small craft. The LCS is also capable of supporting forward presence, maritime security, sea control and deterrence.

The program has fulfilled little if any of its promise, yet could provide value in the future if it is put to the right creative tactical use.

That could be what the Navy has in mind—finding the right creative tactical use for the vessels. Defense News has reported that Chief of Naval Operations Adm. Michael Gilday has said he’d see that the ships become a major contributor to fleet operations.

“There are things in the near term that I have to deliver, that I'm putting heat on now, and one of them is LCS,” Gilday said in his interview with Defense News. “One part is sustainability and reliability. We know enough about that platform and the problems that we have that plague us with regard to reliability and sustainability, and I need them resolved.”

Adm. Gilday added that this resolution will require a campaign plan to determine how the LCS can be best employed in the U.S. Navy of the 2020s. “Those platforms have been around since 2008—we need to get on with it,” he noted. “We’ve done five deployments since I’ve been on the job, we're going to ramp that up two-and-a-half times over the next couple of years, but we have got to get after it. LCS for me is something, on my watch, I’ve got to get right.”

Among the top priorities that Gilday laid out were fielding the mine-hunting mission module, which would replace the Navy’s aging minesweepers and the anti-submarine warfare (ASW) mission module. However, both are long overdue and complicating matters is the fact that the LCS platform could reach its end of life—and be replaced by the FFG(X), the Navy’s future frigate program.

So unless Gilday can move the mine-hunting and ASW modules into overdrive they’ll be too late to do much good for this program. Defense News did report that according to two unnamed sources the goal of fielding such modules could be well along already.

The Navy has worked to upgrade the original platform to accommodate a wider range of weapons systems, and that some of the advanced warfare technologies being engineered for the more heavily armed emerging Frigate are now being backfitted into the LCS fleet.

The question is whether the modular approach can transform the LCS from what has seemed to be an expensive misstep into one that is truly in step with fleet operations that can address changing threats including those from China. Or perhaps it might be better to cut the losses and start from scratch.