The U.S. Is Stocking Up on Upgraded Fighter Jet Missiles 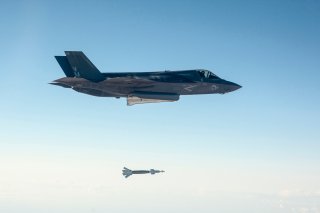 The United States and many of its allies around the globe will be receiving upgraded air-to-air attack missiles. Thanks to a series of software and hardware upgrades, U.S. and allied fighter jets will be equipped with improved guidance and targeting capabilities.

A $972 million deal recently awarded to Raytheon to provide missiles to the U.S. Air Force and Navy will extend and even expand upon the existing AIM-120D advanced medium-range air-to-air missile (AMRAAM) production line. In addition, the Raytheon contract supplies AMRAAMs to nineteen countries, extending the production line for both the United States and allied partners.

The AIM-120D is a beyond visual range AMRAAM designed for all weather, day-and-night attacks. Moreover, it is a "fire and forget" missile with active transmit radar guidance, Raytheon reports state. The contract will produce an entire lot of AIM-120D3 and AIM-120C8 missiles through an effort described as the Form, Fit, Function Refresh (F3R) initiative.

A Raytheon report on the deal says that under the F3R program, engineers use model-based systems engineering and other digital technologies to upgrade multiple circuit cards and other hardware in the guidance section and to re-host legacy software in the missiles.

The U.S. Air Force held the first live-fire of the production version of AIM-120D3 in June 2022, showcasing the success of the missile against a target. There are two additional live fires planned for 2022.

While some of the technical specifics related to the upgraded AMRAAMs are likely not available for security reasons, The AIM-120D has been upgraded several times in recent years with improvements to its attack range, GPS navigation, inertial measurement units, and two-way data links. Several years ago, senior F-22 fighter jet weapons developers explained that software upgrades improved the AIM-120D by integrating a better seeker, making it more maneuverable and adding new countermeasures.

Improvements to missiles can come in many forms, as they can both improve guidance and, for example, introduce course-correcting technologies such that a missile can adjust flight in route to destroy a moving target. Improvements can also increase range and, perhaps of greatest significance, further harden the weapon against countermeasures or enemy efforts to jam a missile’s signal. One way to counter this is the use of frequency hopping technology, which provides the ability to engineer guidance transmissions capable of “hopping” from one frequency to another in the event that one frequency is jammed or disabled by an enemy electronic warfare attack.