Is the U.S. Too Weak to Roll Back China’s ‘Silk Curtain’? 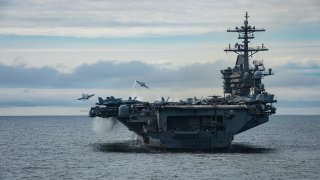 From the Sea of Japan through the Taiwan Straits and down to the Straits of Malacca, a “Silk Curtain” has descended on the Indo-Pacific Rim.

As the U.S.-China rivalry unfolds in Taiwan, more than six thousand miles from the coast of California, China seeks to push against American power by isolating Taiwan and restricting freedom of navigation. Meanwhile, on the other side of Eurasia, Russia, backed by China, seeks to weaken the influence of America and disrupt NATO by incrementally pushing the “Iron Curtain” as deep into Eastern Europe as possible.

This Silk Curtain differs in several ways from the “Iron Curtain” at the center of Winston Churchill’s 1946 speech in Fulton, Missouri, widely thought of as the starting gun for the Cold War between the Soviet Union and the United States.

China seeks a more flexible sphere of authoritarianism and a Eurasian economic empire—with Beijing at the center of a tributary system.

The Silk Curtain is markedly different and more challenging than the Iron Curtain ever was for three reasons. First, it is flexible, constantly moving to and fro as the winds of events and alliances shift. Second, it is permeable as cyber attacks, trade, investment, and shipping move through it despite the risks. Third, it is more flammable with flashpoints such as Taiwan all along the curtain throwing off dangerous sparks. How do you handle a low-altitude, Chinese hypersonic vehicle moving at five times the speed of sound and six times faster than a Tomahawk missile?

What side of the Silk Curtain is self-governing, democratic Taiwan and its twenty-four million people? Speaker Pelosi’s recent feckless farewell visit not only allowed China the chance to demonstrate its ability to blockade Taiwan but also afforded Xi Jinping the opportunity to play the nationalist card and cement his claim to another five-year term as China’s leader.

Many pundits have pointed to the precedent of former speaker Gingrich’s 1997 Taiwan visit to Taiwan, but they fail to add that in 1997 China’s annual defense budget was about the same as Taiwan's but is now at least twenty times larger.

Taiwan epitomizes the complexity of the Silk Curtain since its people, companies, capital, and trade are so entwined with China. Roughly 28 percent of Taiwan’s annual exports head to China, led by over $160 billion of semiconductor-related sales in 2021, while the Taiwanese run an estimated 4,200 businesses in China.

However, the days when Taiwanese investment in China was critical to its economic growth are long gone. It is Taiwan’s leading semiconductor production highlighted by the world’s leading semiconductor foundry, Taiwan Semiconductor, as well as the support of the United States that buttresses its leverage to maintain security and self-government in the face of China’s growing power.

Taiwan’s technology prowess in semiconductors—the brains in all electronics—is its ace in the hole since China has struggled to catch up. This is despite funneling vast amounts of capital into this sector in pursuit of capturing the commanding heights of global technology.

However, just one talented man highlights the risks. Liang Mong Soon, a University of California Berkeley Ph.D., was instrumental in Taiwan Semiconductor and Samsung’s rise as leading-edge powerhouses. He is now Co-CEO of China’s Semiconductor Manufacturing International Corp. (SMIC), ironically founded in 2000 by a U.S.-educated Taiwanese-American who spent two decades with Texas Instruments.

If Taiwan loses its semiconductor lead and leverage over China, this would be a turning point of significant consequence.

Hong Kong’s fate is illustrative. In 1997 when Britain transferred Hong Kong’s sovereignty to China, it represented about 17 percent of China’s GDP. However, as this fell to just 3 percent, Xi Jinping was unrestrained in scrapping China’s one country-two systems commitments to Hong Kong’s citizens. The West’s response was underwhelming, and both American and European financial firms are still falling over each other to manage Chinese wealth.

Taiwan is finally boosting its defense spending, which has been running at only about 2 percent of its GDP, but it needs to move much faster to deter Chinese power. Why isn’t Taiwan doing more?

China is unequaled in global trade and manufacturing and is already an Asian superpower representing roughly half of Asia’s economic output and military spending, not to mention having a lock on rare earth and other critical material inputs for technology, including semiconductors. Russia’s economic output is only 10 percent of China’s but its energy output, nuclear weapons arsenal, and geographic size at the center of Eurasia allow it to punch far above its weight.

China and Russia’s strategy is stunningly simple, distracting and weakening America through dividing and neutralizing Europe while increasing economic heft and military capabilities in the Pacific to deny freedom of navigation, cementing its role as the region’s hegemonic power.

This decade is crucial because it represents China’s window of opportunity before overleveraged real estate and state-owned enterprises, plus demographic headwinds limit its options. America faces a window of vulnerability due to its political instability, feckless foreign policy, and the transfer of much of its manufacturing base to Asia. All this has weakened America’s winning brand of dynamic stability.

America needs a forceful response by quietly and quickly selling Taiwan the military technology it needs to deter and repel China, working with allies to coordinate a strategy of denial to deter and, if necessary, respond to Chinese attacks, and strategically remove supply chains supporting Chinese critical technology development, ramp up efforts and help Taiwan to stop Chinese economic espionage, and shift naval, air, and cyber military resources to the Indo Pacific rim.

Thucydides forces us to confront that conflict and war, as a contest for power, are caused by perceptions of fear, honor, and interest. Given that all three are already present in the threads of U.S.-China rivalry, consummate diplomatic skill and overwhelming deterrence will be necessary to avoid this cold war from evolving into armed conflict.

Carl Delfeld is a senior fellow at the Hay Seward Economic Security Council, publisher of the Independent Republican, and was U.S. Representative to the Asian Development Bank. His latest book is Power Rivals: America and China’s Superpower Struggle.