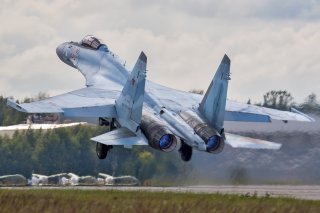 A new training video offers a closer look at the Su-35S, widely regarded as one of Russia’s best and most versatile fighters.

Earlier this month, Russia’s Defense Ministry published a clip from a recent set of Su-35 drills conducted in the northwestern Karelia region near Russia’s border with Finland.

The video opens with a Su-35 taking off, later offering a brief look inside the cockpit before panning to several overhead flight shots. The video showed some minor aerobatic maneuvers and frontal camera shots before cutting to the landing at the end. The brief Defense Ministry press statement accompanying the video noted that Su-35 pilots from the Leningrad regiment of the Western Military District Air Force conducted a wide range of drills, including interception and targeting exercises against unspecified manned and unmanned targets at different altitudes. The Su-35’s also practiced evasive maneuvers in dogfighting scenarios. The drills were conducted in coordination with local Russian air defense and radio systems. Russian officials did not elaborate further on the scope and military context of the exercises; moreover, It is unclear if any other Russian aircraft took part in the drills. The Defense Ministry frequently posts short, commentary/music-free clips from Russian military exercises.

Initially conceived in the 1980s as an advanced Su-27 variant, the Su-35 emerged from a tortured and winding research and development process and entered service in the mid-2010s as arguably Russia’s most advanced air superiority fighter. Powered by twin AL-41F1S engines, the Su-35 boasts thrust vectoring for added maneuverability in dogfighting scenarios. As part of its post-Soviet avionics modernization package, the Su-35 received the upgraded Irbis-E passive electronically scanned array (PESA) and an advanced electronic countermeasures suite.

Trading blows with the best of its competition in supermaneuverability, the Su-35 combines agility with a superbly potent and versatile armament suite. Its bread and butter dogfighting weapon is the R-74 short-range air-to-air missile with off-boresight fire compatibility (allowing the pilot to aircraft an enemy aircraft simply looking at it through their helmet), but it also possesses the R-77 medium-range missile that offers broadly similar functionality to its U.S. AIM-120 AMRAAM counterparts. Nevertheless, the Su-35 can fill a secondary strike role if needed—it has reportedly done so on at least one occasion during the Russian intervention in the Syrian Civil War, though the details of that Su-35 engagement with Syrian militants remain unconfirmed.