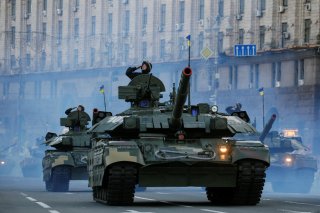 Though the Ukrainians scored multiple wins in the first days of the conflict against a larger, better trained, well-equipped adversary, these early successes have been proven difficult to replicate in the eastern Donbass region.

The Congressional Research Service, a non-partisan think tank that prepares reports for the United States Congress, recently released a paper summarizing the current state of play on the ongoing conflict in Ukraine. The paper outlined the personnel and equipment situation, explained the effect that Western military aid has had, and provided a prediction of the war’s future course.

“Since 2014, the UAF has gained important combat experience fighting Russian-led forces in the Eastern Ukraine regions of the Donbas, which has led to a large proportion of trained, experienced veterans among Ukraine’s population,” the report explained.

“These veterans and other volunteers (including foreign recruits, some with previous military experience) were quickly mobilized into Ukraine’s new, volunteer Territorial Defense Forces (TDF) and Reserve, without the need for lengthy training. Additionally, the high level of experience and training among the recruits meant they were able to operate artillery, tank, and support systems that traditionally require time for reservists or volunteers to master. These units were crucial in supporting and enabling regular UAF units to spearhead resistance and counter offensives in multiple areas.”

Firstly, Ukraine was “in the process of developing a professional noncommissioned officer (NCO) corps along NATO standards before Russia’s 2022 invasion. The UAF did not have a fully developed professional NCO corps by the time of the invasion and continued to deal with issues with retention, professional development, and funding,” the report noted.

“As described previously, the high proportion of trained veterans, many with combat experience, mitigated to some degree the need for an established NCO corps to train and command new recruits. However, with mounting UAF losses and recruits with no experience as replacements, continuing the development of an effective NCO corps will likely remain a major challenge and a key UAF priority.”

The other significant issue is that Ukraine badly needs reinforcements. This puts pressure on Ukrainian training pipelines and forces abridged recruit training, resulting in a less skilled and combat-ready fighting force. But, to maintain pressure on the Russians, Kyiv has struck a balance between providing for its immediate needs and ensuring comprehensive training, which may adversely affect Ukraine’s ability to effectively field advanced weapon systems and undertake complex operations in the medium to long-term.

Ukraine appears to be consolidating forces in the eastern Donbas region to go toe-to-toe with the Russian military machine in a war of attrition. While Russia enjoys an advantage in firepower and can bring much more mass into the fight, precise, long-range Western weapons entering the fight could tip the balance of the war in Ukraine’s favor.

While the quality of troops Ukraine is sending into battle is not as high as it could be, Ukrainian soldiers’ motivation could not be better. With the Kremlin unwilling to call for a mass mobilization of troops, Russia’s long-term manpower prospects appear unsustainable.