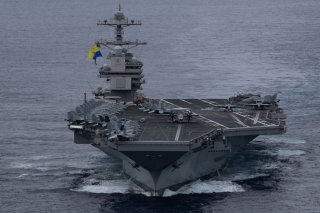 The USS Gerald R. Ford—the first of the U.S. Navy’s new class of aircraft carriers—arrived in the United Kingdom for a port visit at Portsmouth.

“The crew of USS Gerald R. Ford is honored and excited to visit Portsmouth, heart of the Royal Navy, during Ford’s first deployment,” said Capt. Paul Lanzilotta, commanding officer of Ford, in a statement. “The United Kingdom is a cherished ally. We are here to work together, strengthen our partnership, and give our Sailors the opportunity to explore this beautiful city.”

The latest of the U.S. Navy’s carriers, the Ford-class, is the world’s most advanced and offers significant improvements over the preceding class. For example, the carriers incorporate new electromagnetic catapults for aircraft launch and improved internal elevators that shuttle aircraft and materiel throughout the ship’s extensive bowels.

The U.S. Navy explained that the Ford “deployed from Norfolk, Virginia on Oct. 4 and has been conducting exercises with NATO allies, including Canada, Spain, Denmark, the Netherlands and Germany, throughout their deployment.”

The U.S. Navy also highlighted the depth of the U.S.-UK relationship. “NAVEUR and the Royal Navy share a proud maritime partnership and defense cooperation focused on promoting security, stability and prosperity across NATO territories. The U.S. and the U.K. share a commitment to upholding and advancing the rules-based international system.”

Though not explicitly mentioned in the U.S. Navy statement, a point of concern for NATO allies is the ongoing war in Ukraine. Though the conflict is not likely to envelop the entire continent, European countries are understandably worried about their future security.

As the backbone of NATO, the U.S. Navy plays an outsize role. Sending the Navy’s most capable aircraft carrier to the continent is a meaningful gesture of support during one of the most trying periods of the last eighty years.

“So honored to meet the sailors of the USS Gerald R. Ford. The patriotism, commitment, and professionalism of the men and women of the Ford is so inspiring and I know how much it means to our British friends to see them here in British waters. It's yet another example of the Special Relationship in action,” said the U.S. ambassador to the United Kingdom Jane Hartley, in the U.S. Navy statement.