West Africa’s Jihadists Are Going to War—Against Each Other 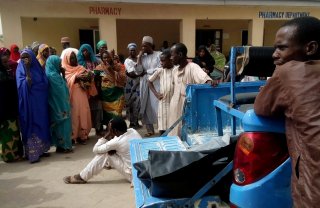 The Islamic State’s West Africa Province (ISWAP) and Boko Haram, two of Africa’s most prominent Islamist terror organizations, have conducted a series of violent attacks in rural West Africa in recent days that have allegedly left more than one hundred dead.

Their targets? Each other.

The two groups, which were once nominally part of the same faction, have had a spectacular falling-out. Abubakar Shekau, Boko Haram’s long-time leader and one of Africa’s most brutal jihadist leaders, formally swore allegiance to ISIS “caliph” Abu Bakr al-Baghdadi in March 2015 but renounced it in 2016. Hundreds of Boko Haram’s fighters defected, creating ISWAP and reaffirming their loyalty to al-Baghdadi.

ISWAP has since eclipsed Boko Haram in power; its dominant position was cemented by the killing of Shekau by ISWAP fighters in May 2021. However, Boko Haram fighters have refused to give up. In the past week, they launched a series of attacks against ISWAP targets within Nigeria, bordering Lake Chad. Boko Haram fighters allegedly captured Kirta Wulgo, a small island that served as a communications and logistics hub for ISWAP, following an hours-long clash with the group.

“It was a mutually destructive fight that lasted for more than nine hours,” according to a local fisherman interviewed by AFP.

An anonymous security source claimed that Boko Haram fighters had arrived on speedboats and forced ISWAP militants to retreat from six checkpoints before capturing the island. He suggested that “more than 100” fighters on both sides had been killed.

Following Shekau’s death, Boko Haram has been led by Bakoura Buduma, Shekau’s former lieutenant. The group has maintained a safe territory near Lake Chad, where it has launched attacks against ISWAP and the Nigerian government. The capture of Kirta Wulgo puts it within striking distance of ISWAP’s strongholds on Lake Chad.

The jihadist insurgency in the Sahel has displaced two million people and left more than 40,000 dead. Even during the high tide of ISIS’s expansion in 2015, Boko Haram was considered to be deadlier and more destructive in raw numbers, and violence initially confined to Nigeria later spread to neighboring Niger, Cameroon, and Chad.

One of the reasons for the group’s departure from ISIS was al-Baghdadi’s prohibition on using children as suicide bombers, which Shekau refused to obey.