The West Is Pushed to Soften Russia Rhetoric at G20 Summit 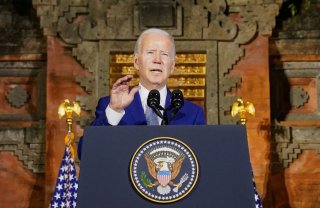 Indonesian officials are calling on Western leaders to soften their rhetoric criticizing Russia over its invasion of Ukraine in a bid to ensure that the G20 summit in Bali does not end without a joint declaration, Politico reported.

European, Australian, Canadian, Japanese, and U.S. officials are being pressured by their Indonesian counterparts to show the “flexibility” needed for participants to agree to a G20 declaration, three diplomats familiar with the talks told Politico.

Indonesian president Joko Widodo “considers it a personal success” if a G20 joint statement can be agreed upon, according to an Indonesian official cited in the report. A palatable statement could possibly focus on “upholding international law” rather than explicitly condemning Russia’s invasion, the Politico report said. “Obviously we can’t be as tough as we do it in G7 when you need the Russians, Chinese and Saudis to agree,” said a Western diplomat. “The question is how much we need to delete.”

Widodo has resisted pressure from Western countries to exclude Russia from the Bali summit altogether, instead opting to invite Ukrainian president Volodymyr Zelenskyy as a compromise gesture. The Russian Embassy in Indonesia announced last week that Putin would not attend the G20 but may join one of the meetings virtually.

Russian foreign minister Sergey Lavrov is representing Putin at the summit. The AP reported on Monday that Lavrov, seventy-two, was taken to the hospital with a heart condition after arriving in Bali. Moscow dismissed the report as “fake,” posting a video of Lavrov sitting outdoors on a patio. “I would [advise] Western reporters to be more honest than they have been and to report the truth more often without being limited in their reports to a single point of view, which they have been spreading on every issue involving the interests of the Russian Federation, which are being ignored,” Lavrov said in the clip.

It was previously reported that the White House was taking all possible steps to avoid any contact between Putin and Biden at the event. G20 participants have traditionally taken part in a “family photo” at the start of the summit, but the Politico report said Western leaders “have hesitation about being in the same frame as Lavrov.” The Guardian reported last week that there will not be a family photo in Bali, adding that British officials believe it to be “nearly impossible” for the summit to end with a communique.

The issue of a possible joint summit resolution is still up in the air.  “That dialogue is continuing between officials. You know the way that these conferences work. We've just got through an East Asia Summit, an ASEAN meeting and a range of other summits,” Australian prime minister Anthony Albanese said in a press conference on Sunday. “So we'll wait and see what happens”