Is Erdogan the Winner of the Russia-Ukraine War? 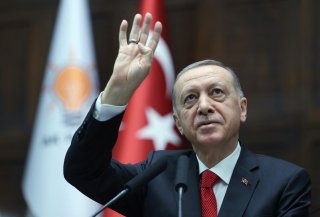 Turkish president Recep Tayyip Erdogan capped off a week of emergency diplomacy to save the beleaguered Ukraine grain deal by doubling down on his decision to stonewall NATO expansion, putting a renewed spotlight on Turkey’s nuanced multi-vector posturing as the Russia-Ukraine war enters its ninth month.

Ukrainian president Volodymyr Zelenskyy and U.S. secretary of state Antony Blinken thanked Erdogan earlier this week for pulling Russia back into a multilateral agreement for the continued export of Ukrainian grain shortly after the Kremlin said it was leaving the deal. The reversal followed a Tuesday phone call between Erdogan and Russian president Vladimir Putin. Erdogan secured Putin’s commitment to re-enter the deal, which was brokered by Turkey and the United Nations in July, in exchange for guarantees aimed at assuaging Moscow’s growing list of security, political, and logistical grievances with the agreement.

Ankara’s resuscitation of the grain deal came on the heels of Erdogan’s announcement in October that he has accepted Putin’s earlier proposal to turn Turkey into a “natural gas hub.” Turkey, Erdogan said in October, “will be a hub for natural gas as well. In our last meeting, we agreed with Putin on this issue. We will create a hub here with Turkish gas coming from Russia.” Technical details surrounding the proposal have not been fleshed out by the Russian side, which is actively seeking alternative gas routes amid a steep decline in energy exports to the EU. Putin praised Erdogan as a reliable partner when asked about the project during a news conference last week. “It is easier for us to work with Turkey. President Erdogan is a man of his word ... and it is easier for us to control the Black Sea,” he said.

Erdogan has consistently—and, to a significant extent—successfully positioned himself as a leading mediator in the Ukraine War, breaking ranks with NATO allies to assert a position of qualified neutrality. Though Ankara has repeatedly condemned Moscow for launching the invasion and previously supported Ukraine with shipments of Bayraktar TB2 drones, Turkey distinguished itself as a forceful proponent of a negotiated settlement to end the war at a time when such calls are denounced by Kyiv and some Western leaders as offensive and immoral. Turkey’s Foreign Minister Mevlut Cavusoglu suggested in August that some NATO countries “want the war to continue,” further highlighting a stark difference of approach between Ankara and some Western countries on the key question of how the Ukraine conflict should end. Turkey further bolstered its mediator credentials by joining with Saudi Arabia last month to broker a massive prisoner swap agreement between Russia and Ukraine.

Even as Erdogan works to establish himself as the war’s key power broker, he is doubling down on his stance as one of the few remaining holdouts on the NATO bids of Sweden and Finland. Ankara has almost single-handedly stonewalled an accession process that NATO chief Jens Stoltenberg previously assured would “go very quickly,” holding their bids hostage to a set of security and political demands. Erdogan’s list includes the lifting of an arms sale embargo on Ankara and the extradition of Swedish and Finnish nationals classified as terrorists by Turkish authorities. The Swedish and Finnish governments have signaled their willingness to accommodate some of Ankara’s requests, with Sweden committing to lift the arms sale embargo, but have dragged their heels on others. Finnish officials reportedly said in September they will not overturn previously denied extradition requests from Turkey, describing those decisions as final.

Cavusoglu said during a press conference with Stoltenberg earlier this week that Sweden and Finland have not yet fulfilled their obligations under a prior deal lifting Ankara’s objections to their NATO bids. Erdogan agreed to meet Sweden’s new prime minister, Ulf Kristersson, to discuss the matter further, but insisted that Turkey will not revise its demands. “Our stance has not changed,” he said, according to ABC News. “There is no compromise in the fight against terrorism and we have no intention of making any concessions.”

Bloomberg reported Turkey is unlikely to greenlight Sweden’s NATO bid by the end of the year, citing “officials familiar with the issue.” While Finland is apparently on more solid footing, Ankara plans to vote on both applications at the same time, Bloomberg noted. Experts say Erdogan has little reason to relinquish his unique leverage over Helsinki and Stockholm until after Turkey’s June 2023 general election, adding that Ankara’s formal demands from the two applicant countries are a smokescreen for concessions—possibly including the sale of F-16 fighter jets—that it seeks to extract from Washington. “The membership bid of Finland and Sweden, he tries to use these two bargaining chips to get something from the West,” analyst Ilhan Uzgel told VOA News.

There is widespread consensus that Erdogan’s deft grain diplomacy and tough messaging on NATO are partially intended to shore up his precarious domestic position, but there is also a deeper calculus at work. Ankara’s posturing between Russia and the West speaks to Erdogan’s expansive vision of Turkey as an indispensable power player—if not a great power—in the transition to a multipolar world. Erdogan’s ambitions, which stretch back many years and are informed by an eclectic blend of ideologies, were not engendered by Russia’s February 24 invasion of Ukraine. Rather, the Russo-Ukrainian War established a favorable geopolitical climate for Ankara to pursue an effective multi-vector foreign policy.

A swift and decisive Russian victory would have obviated the need for a neutral broker such as Turkey, as would a readiness on the part of Western policymakers to engage in direct negotiations with Moscow. The drawn-out nature of the conflict, its multilayered political subtext, and far-reaching economic repercussions have cultivated unique opportunities for Turkish diplomacy, and Erdogan has shown he intends to make the most of them.