Which Democratic Woman Will Joe Biden Pick To Be His Vice President? 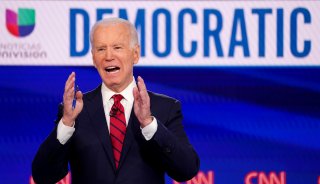 Key point: The former vice president is looking to add a woman to his ticket.

Following the results of Super Tuesday, Joe Biden has been able to reclaim his status as frontrunner for the 2020 Democratic presidential nomination. He leads his nearest opponent, Senator Bernie Sanders of Vermont, by 900,000 votes and over 75 delegates. Able to appeal to both black voters and white suburbanites, it appears Biden will be able to ride this commanding coalition to victory at the national convention and possibly the White House.

Assuming Biden is able to seal the deal, who is he likely to choose for his vice-presidential nominee to complete the ticket?

“There’s at least nine women I can think of who are fully capable of being president,” Biden said in January, when asked about a possible shortlist of running mates. As a man who served as Barack Obama’s vice president for eight years, Biden certainly has an idea of what the job entails and who he’d prefer.

A vice president should be both a reflection of the top of the ticket, and a contrast, covering areas where the presidential nominee is the weakest. In Biden’s case, this is a woman, preferably under the age of sixty-five, who shares his moderate, center-left politics. At seventy-seven, and with rampant speculation about his diminishing cognitive abilities, any person chosen to be vice president must be considered experienced and responsible enough to handle the office under any unfortunate circumstances.

Using these metrics, and based on Biden’s own description, the National Interest has compiled a list of the most likely vice-presidential candidates.

Senator Amy Klobuchar of Minnesota stands near the top of the list. The fifty-nine-year-old has raised her national profile during her presidential campaign, which she suspended this week to endorse Biden. On her third term in the senate, Klobuchar has created a brand as a bipartisan workhorse, with strong connections to Midwest voters. Her endorsement is largely responsible for Biden’s unexpected victory in Minnesota on Super Tuesday.

Senator Kyrsten Sinema of Arizona’s election in 2018 was one of the highlights of the Democratic Party’s midterm gains. Only forty-three years old, Sinema had already served three terms in the House prior to her senate victory. A progressive activist in her youth, since her election to congress Sinema has built a record as one of the most conservative members of the Democratic caucus. Adding her to a national ticket would both add representation (Sinema is openly bisexual) and make the chance of picking up Arizona more likely.

Governor Gretchen Whitmer of Michigan is fresh from giving the Democratic response to the State of the Union. Elected in 2018, Whitmer had spent the previous fourteen years in state government. Michigan is one of the swing states that Democrats must win in 2020, and her selection would push towards that goal. Whitmer endorsed Biden earlier this week, which may be the tipping point in next week’s contentious Michigan primary.

Senator Catherine Cortez Mastro of Nevada was elected in 2016, after serving eight years as the state attorney general. In her years in the senate, she’s pushed for the ban on bump stocks, and shares Biden’s opinion on Obamacare, favoring modest improvements rather than an overhaul. Fifty-five years old and Mexican American, Cortez Mastro could be an outreach to Hispanic voters (a demographic where Biden is weak), although she does not speak fluent Spanish.

Senator Kamala Harris of California has been listed as a possible vice-presidential nominee since she suspended her presidential campaign in December. A prosecutor and state attorney general before her election to the senate in 2016, Harris has been considered an up-and-comer in the party before her campaign failed to take off. Alternatively moderate and progressive, the fifty-five-year-old clashed with Biden in the early debates, although he has mentioned her by name as a possible pick. She has not yet endorsed Biden, before or after he lost the California primary.

Former Georgia statehouse member Stacey Abrams has been a darling of the Democratic Party and media since her failed gubernatorial election in 2018. Abrams, who still refuses to concede her defeat, served a decade in the Georgia House of Representatives, six of them as Minority Leader. At forty-six years old, she has announced her availability for a vice presidential selection and her eventual presidential ambitions. Biden has referenced her as a possibility.

Senators Maggie Hassan and Jeanne Shaheen of New Hampshire, both of which Biden has said he’d consider for his vice president. Both women are former governors and come with decades of political experience. Hassan, at sixty-two, is younger than the seventy-three-year-old Shaheen. Both women share Biden’s center-left politics and represent a swing state the Democrats narrowly won in 2016.

Former Assistant Attorney General Sally Yates, the last of whom Biden has referenced by name as being on a hypothetical shortlist. Appointed by Barack Obama to her position in 2015, Yates was Acting Attorney General for the first ten days of the Trump administration before her abrupt dismal for refusing to implement the president’s controversial travel ban. Having lived her fifty-nine years as a lawyer, Yates has never served in elected office and up until recently was described as apolitical.

Hunter DeRensis is the senior reporter for the National Interest. Follow him on Twitter @HunterDeRensis. This article first appeared last month.