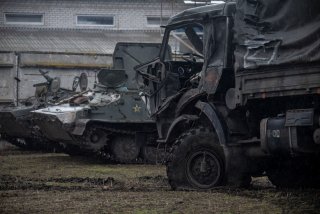 The Biden administration has lowered bureaucratic barriers for intelligence sharing, giving the Ukrainian government greater access to U.S. intelligence data, according to the Wall Street Journal.

While the United States has engaged in intelligence sharing with Kyiv since the beginning of Russia’s invasion on February 24, it was restrained in its ability to do so by strict guidelines intended to protect the security of U.S. intelligence. The restrictions in place prevented U.S. spy agencies from sharing real-time information on Russian ground targets, particularly artillery. Lifting them will give the Ukrainian military better knowledge of those targets’ locations and greater capacity to strike back against Russian advances.

An intelligence official claimed that the restrictions had been scaled back after a bipartisan push from Capitol Hill, where Republicans and Democrats have largely been united in opposing the Russian invasion.

“We’re adjusting as circumstances warrant, and we’ll continue to ensure that operators have flexibility to share intelligence as the conflict evolves,” the official told the Journal.

In general, the U.S. government has mandated that shared data sent to non-essential U.S. allies be scrubbed of information that could identify how the U.S. obtained it. In the absence of this restriction, a Russian spy within the Ukrainian government or military with access to shared intelligence would then be able to determine how it had been obtained, jeopardizing the ability of the U.S. intelligence community to collect information on Russian forces.

Before the barriers were eased, some experts expressed concern over the slow pace of information sharing between Washington and Kyiv, and Republican lawmakers on Capitol Hill criticized the Biden administration for failing to act quickly. Sens. Ben Sasse (R-NE) and Marco Rubio (R-FL), the ranking Republican member of the Senate Intelligence Committee, accused Biden of “withholding” essential information from the Ukrainian military.

The senators’ criticism led White House press secretary Jen Psaki to insist that the United States had been “consistently” sharing intelligence with Ukraine to the best of its ability, arguing that “reports that suggest otherwise are inaccurate.” Ukrainian president Volodymyr Zelensky and other high-level Ukrainian officials have praised the United States for its role in sharing information and had not criticized Biden prior to the easing of restrictions.

An anonymous Defense Department official claimed that the process of scrubbing data from the information to obscure its source typically took no longer than thirty minutes, according to CNN.