Who Was Really Behind the Istanbul Bombing? 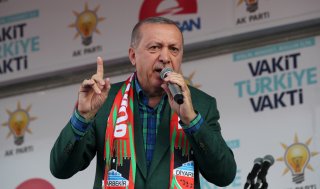 Sunday’s explosion on Istanbul’s busiest thoroughfare, Istiklal Caddesi, which killed six and injured eighty-one, was sudden and horrible. A good Turkish friend of mine, a former tank commander, texted me from Istanbul: “I hope that will be an opportunity for Western countries (USA, etc.) to see whom they are backing and for what???” And “These terrorist attacks are causing increases of Erdogan’s votes.”

This kind of incident, although not frequent, is a feature of Turkish life. During Turkey’s “dirty war” with the Kurdistan Workers’ Party (PKK) from 1984 to 1999, there were many such incidents. In 1993, investigative journalist Ugur Mumcu was killed by a car bomb, and the crime is still unsolved.

The Turkish authorities behaved with remarkable efficiency. The perpetrator, a Syrian national named Ahlam Albashir, was quickly arrested and photographed wearing a hoodie emblazoned with “New York.” Albashir also reportedly admitted she had been trained as a “special intelligence officer” by the PKK/YPG (the U.S.-supported People’s Protection Units) in Syria.

Turkish interior minister Süleyman Soylu concluded that the order for the terror attack came from Ayn al-Arab in northern Syria, where the PKK/YPG has its Syrian headquarters. Because of U.S. support for the YPG and Syrian Democratic Forces (SDF), which are led by the YPG in the fight against the Islamic State, Soylu dismissed condolence messages from the United States.

However, amid a drop in President Recep Tayyip Erdogan’s approval ratings ahead of next June’s presidential and parliamentary elections, there are grounds for some skepticism. Research has shown that Erdogan’s ratings were boosted after Turkey’s four previous military operations in Syria, but a new incursion last autumn was blocked by opposition from Russia and Iran.

Both the PKK and the SDF have denied responsibility, and Turkey’s ongoing engagement in Iraq rules out a new cross-border operation into Syria. Instead, Turkey chooses to rail against the United States.

Abdüllatif Sener, a founding member of the ruling Justice and Development Party (AKP) and now opposition deputy, previously stated that Erdogan would be prepared to drag Turkey into a civil war to hold on to power. In June 2015, the AKP lost its overall majority when the pro-Kurdish Peoples’ Democracy Party (HDP) overcame the electoral threshold and won 80 of the parliament’s 550 seats. Consequently, in a bait-and-switch deal with the United States, Erdogan reignited the war with the PKK and regained the AKP’s majority in a November 2015 snap election.

There has been some debate over the lengths Turkey’s president is prepared to go to in order to prevent a democratic outcome in next June’s elections. Indeed, HDP leader Selahattin Demirtas has been imprisoned since 2016; the mayor of Istanbul, Ekrem Imamoglu, a strong competitor, faces four years in prison and a political ban; and the government plans to revoke the parliamentary immunity of the main opposition leader, Kemal Kilicdaroglu, as well as that of sixty-four other deputies.

Shortly before Turkey’s local elections at the end of March 2014, an audiotape surfaced of a National Security Meeting between Foreign Minister Ahmet Davutoglu, Undersecretary Feridun Siniroglu, Deputy Chief of Staff Yasar Güler, and head of the National Intelligence Organization (MIT) Hakan Fidan. The recording suggested that a false flag operation was planned to give the Turkish military the opportunity to intervene in Syria. After Siniroglu called for a justification, Fidan replied: “I can provide justification if need be.” Siniroglu also objected that “our national security has become a common, cheap domestic policy outfit,” but there was an agreement not to back down. Then-Prime Minister Erdogan denounced the leak as “villainous,” but its authenticity was never denied.

Pulitzer Prize winner Seymour M. Hersh’s reporting raised a similar question mark about the sarin attack on the Damascus suburb of Ghouta in August 2013, which was expected to force the United States to cross President Barack Obama’s “red line.”

In his book After ISIS, veteran Middle East reporter Seth Frantzman documented that ISIS operated a major acquisition network and a direct line of supply for explosives and propellants in Turkey.

Moreover, a recent memorandum from the U.S. Treasury Department stated that ISIS has often relied on logistical hubs in Turkey to transfer funds.

In 2015, after the deadliest terror incident in Turkish history was carried out at a peace rally in Ankara, Erdogan blamed the attack on a “terror collective” consisting of the PKK, ISIS, Syrian intelligence, and the Syrian Kurdish Democratic Union Party (PYD). However, it turned out that the perpetrators were two ISIS suicide bombers.

With regard to Erdogan’s electoral prospects, analyst Greg Copley is unequivocal: “Erdogan has a limited time in which to recover his position, either electorally or, due to a national security emergency, through the imposition of some form of force majeure to nullify or prevent the next election.”

“Erdogan, after all, did contrive to stage a ‘failed coup attempt’ on July 15–16, 2016, in order to draw out and suppress his political and military rivals, in much the same manner that Adolf Hitler’s Nazis staged a contrived putsch between June 30 to July 2, 1934.”