Why are Russia’s Nuclear ICBM Launchers on Combat Alert? 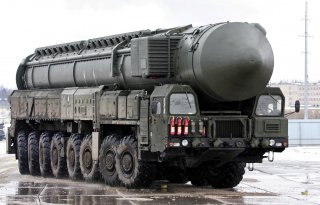 Russia has stepped up the development of its intercontinental ballistic missiles (ICBMs). In the New Year, its Strategic Missile Force will receive thirteen launchers equipped with the latest Yars and Avangard ICBMs. The Russian Ministry of Defense also announced that additional funds have been allocated for the production of the systems.

“In 2021, the Defense Ministry will deal with a number of priority rearmament tasks. It will have to put 13 launchers with Yars and Avangard intercontinental ballistic missiles on combat duty in the Strategic Missile Force,” Russian Defense Minister Sergei Shoigu said on Monday during the ministry’s enlarged board meeting, as reported by Tass.

Shoigu added that Russia is now working to complete the construction of the necessary infrastructure for Yars and Avangard ICBM platforms, which will allow the missiles to be deployed in Kozelsk, Yasny, Uzhur, Novosibirsk and Yoshkar-Ola.

“Additional funds allocated for the production of these systems will help reach the level of the strategic nuclear forces’ provision with advanced weapons at 88.3 percent,” the defense chief suggested.

The Avangard boost-glide vehicle is reported to have hypersonic speed, and is capable of flying at a hypersonic speed of up to Mach 27—or about 32,000 kilometers per hour—in the dense layers of the atmosphere, maneuvering by its flight path and its altitude and breaching any anti-missile defense. Its high speed was reportedly made possible by the use of “new composite materials,” which allowed it to stay within a stable range of 1,600 to 2,000 degrees Celsius.

Such a combination of high speed and fast maneuverability could make it considerably difficult to counter with traditional anti-missile systems. The Avangard hypersonic weapon was first mentioned by Russian president Vladimir Putin in March 2018.

As reported by Tass, the RS-24 Yars is a Russian strategic missile system comprising a mobile or silo-based solid-propellant intercontinental ballistic missile with MIRVed (multiple independently targetable vehicle) warheads. The Yars, a modification of the Topol-M missile system, was developed by the Moscow Institute of Thermal Technology under the supervision of academician of the Russian Academy of Sciences Yuri Solomonov.

The Russian military conducted a successful training launch of the platform in September 2017, which verified the reliability of the weapon.

In November, Chief Designer of the Moscow Institute of Thermal Technology, the Yars developer, Yuri Solomonov said that Russia will complete the rearming of its Strategic Missile Force with Yars silo-based and mobile intercontinental ballistic missiles. To date, six missile divisions have been rearmed with the Yars mobile ICBMs, and according to the Russian Defense Ministry, in September the Strategic Missile Force’s missile division stationed in Irkutsk in Siberia had been re-equipped with the platform.

Russian state media had previously reported that the first missile regiment armed with Avangard hypersonic weapons assumed combat duty in the Yasny missile division in the Orenburg Region in late 2019.