Why Australia Is the Perfect Training Ground for the Marines 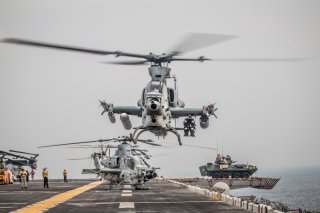 “MORE READY, MORE LETHAL, AND MORE ALLIED IN THE INDO-PACIFIC,” a statement from the Marine Corps reads. The statement refers to Marine Rotational Force-Darwin, an annually-rotated Marine Corps force based in Australia.

MRF-Darwin completed its deployment to Australia and comes back to the United States with “a tremendous understanding of the conditions, procedures, and tactics necessary to fight and train in the Indo-Pacific, alongside a premier ally in Australia, and alongside outstanding allies and partners across the region.”

“This year our Marines and Sailors participated in over a dozen multinational exercises and events enhancing our partnerships with over 20 different nations including great teammates like Australia, Indonesia, and Japan,” explained Col. Chris Steele, MRF-D 22’s commanding officer.

“Serving as the first regimental headquarters to lead MRF-D, we were able to further integrate two highly capable and interoperable forces to demonstrate the strength and endurance of our alliance and posture the team to contribute to regional security,” he added.

The Marine Corps statement explained that Australia’s conditions are particularly valuable. The Marine Corps “benefited significantly from their time in Australia. Due to Hawaii’s airspace limitations, the Australian training areas and population density allowed for a massive increase in flight time and exposure to diverse training areas for the MV-22 Osprey pilots, as well as great opportunities for the Marine Air Control Group and Marine Wing Support Squadron detachments to enhance their aviation support capabilities.”

“The Low Altitude Air Defense platoon integrated with their RAAF counterparts and practiced simulated engagements on live aircraft through heavily-vegetated terrain and on the South Pacific islands, the RADAR teams utilized the terrain and international aviation exercises to enhance both aviation and maritime tracking capabilities, and the MWSS detachment greatly increased forward fuel resupply proficiency with standard and innovative methods, including the use of the Tactical Aviation Ground Refueling System and organic ADF systems,” the statement added.

Australia is a prime venue for the Marine Corps to implement and perfect some of the conditions specified in Force Design 2030. The document—the brainchild of the commandant of the Marine Corps, Gen. David Berger—explains that in order to pivot from fighting non-state actors in the Middle East to the threat posed by China in Asia, the Marines have to change. To that end, the Marine Corps has shifted gears to become a more effective fighting force in littoral waters, divesting all tank battalions as well as much of their tube artillery and mortars. The Marines have also invested in fielding anti-ship missiles.