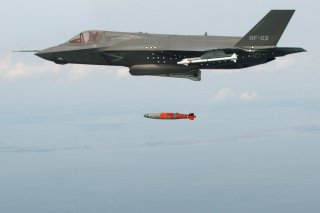 The F-35 is built to elude and destroy enemy air defenses, use cutting edge stealth technology to fight advanced enemies and draw upon long-range sensors to find otherwise far away enemy targets.

Yet, at the same time, the Joint Strike Fighter is built as a “multi-role” stealth fighter, meaning it is also specifically engineered with an ability to launch massive air attacks on air-to-air and air-to-ground targets. This kind of mission scope invites the question of just what would it mean to full-load an F-35 with weapons?

The aircraft does have an internal weapons bay intended to enable attacks while preserving a stealth configuration, yet a full-force attack will mean using the external pylons as well to enable what many call the F-35’s “Beast Mode.”

An interesting report from The Aviation Geek Club describes Beast Mode as arming an F-35 with “six inert 500-pound GBU-12 laser-guided bombs, four loaded externally on the wings and two internally in the weapons bay, as well as an AIM-9 training air-to-air missile,”

Naturally, this means an F-35 would increase its radar signature and decrease the effectiveness of its stealth properties, however, such a configuration would be possible in combat environments wherein the United States has already achieved air supremacy. Externally hanging weapons present contours and configurations likely to provide enemy radar with a more detailed radar return, therefore delivering a rendering of the aircraft to adversaries.

This kind of attack mode might also be needed should a combat campaign need to extend mission dwell time, creating the opportunity for F-35s to hit more targets with a larger weapons load.

Pilots in training, according to the report, are preparing for large-scale, full-load attack in preparation when flying the F-35.

Laser-guided GBU-12s can pinpoint ground targets “lit up” by laser designators from the air or ground, enabling precision strikes. The Air Force’s GBU-54, also a laser-guided bomb, brings an ability for an aircraft to hit moving targets on the ground as well.

A “training AIM-9” is quite significant as it provides pilots an opportunity to prepare for air-to-air war with an AIM-9X. The upgraded AIM-9X is able to offer pilots an “off-boresight” targeting ability, meaning enemy aircraft behind or underneath the missile’s straight on trajectory. An aircraft firing an AIM-9X gives pilots the opportunity to destroy enemy targets from all angles, given that the guidance system of the missile includes course-changing technology.

Decreasing stealth properties will not render the F-35 ineffective in a variety of respects, given that that F-35 is built for heavy bombing as well as reconnaissance missions. Thinking of these together, an F-35 could use its EO-IR cameras and surrounding sensors to find far-away ground targets autonomously, and then attack them from the air with bombs.

This would be a massive increase in efficiency, as the aircraft could respond to new intelligence information in real-time, thereby greatly reducing latency and sensor-to-shooter time. By extension, the F-35’s often-discussed “sensor fusion” could play a role here, as it relies upon computer automation and AI to gather otherwise separate sensor information, analyze and organize it to provide pilots with a single integrated picture. Navigational, targeting, electronic-related metrics can all be merged by the aircraft itself.